KABUL (Pajhwok): Thirty-one people were killed and 84 others injured in Afghanistan last week, with 59 percent of these casualties resulting from a blast inside a mosque in Kabul City.

At least 31 people were killed and 84 others injured in Afghanistan last week. Casualties from natural disasters not included in these figures.

Five people were killed and 58 others injured in a bomb blast inside a mosque in Kabul City’s Allauddin area on Friday afternoon, according to health officials.

Kabul police, however, said 10 people were killed and 30 others injured in the blast. No group has claimed responsibility for the blast.

Eleven people were killed and 17 others injured in two separate blasts in Mazar-i-Sharif, the capital of Balkh province, last week. Daesh claimed responsibility for the two blasts.

A child was killed when armed men opened firing on a rickshaw in Jalalabad City last week. One child was killed, two others and a woman were injured in a warhead blast in Sararud district.

Mining Department Director was killed and two others injured in a roadside blast in Faizabad City, the capital of northeastern Badakhshan province last week. Unknown gunmen killed a teenage boy in front of his home in the Arghandab district of Kandahar province.

According to local sources, five coalminers were killed in the Dara-i-Suf Paen district last week. Four people wounded in a landmine blast in Kunduz while a body was recovered in the Pashtonkot district of Faryab province. 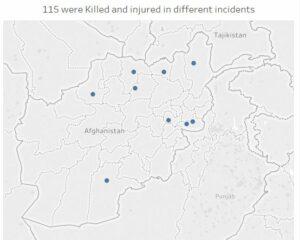 The previous week, 128 people were killed and 161 others injured in Afghanistan.

Dealing with the world

Russian foreign ministry said Moscow will accept Afghanistan government when it is inclusive.

This comes as Russia has approved the credentials of newly sent Afghan diplomat, Afghan acting government officials claimed the incumbent government was inclusive and pledged not to pose threat to any other country asking other nations to ensure mutual respect and honor during interstate relationship.

According to reports, acting Foreign Minister Ameer Khan Muttaqi last week held discussion with Qatari officials over undecided points of the agreement pertaining to the security and operation of Afghanistan’s airports. Muttaqi discussed political and economic relationships with the Qatari officials as well.

Demand for reopening of girls schools

This move sparked national and international outrage and last week some circles raised voice for the reopening of girls’ schools.

Human Rights Watch said there were no signs of girls secondary and high school reopening in Afghanistan and this may be the Taliban ultimate decision.

Continuation of assistance, release of reserves

UN experts team also criticized the freezing of Afghanistan assets by the US.

UN Secretary General AntónioGuterres said that the shortage of cash in Afghanistan could face the country with financial and economic problems and it will have worst consequences for the people of Afghanistan.