KABUL (Pajhwok): Fifty-nine people were killed and wounded across Afghanistan in violent incidents last week when the formation of a planned grand jirga, structure of the Reconciliation Commission and strategy for hijab evoked mixed reactions.

Twenty-one people were killed and 38 others injured, excluding casualties from natural disasters, in Afghanistan last week.

According to reports, six people were killed and 18 others injured in a bomb blast inside a mosque in Kabul last week.

Ten people were killed and 15 others injured in seprate blasts in northern Balkh province. Daesh claimed responsibility for the Balkh attacks.

Last week, two pople were wounded in a mortar shell blast in Uruzgan and Kandahar provinces. Two people were killed in security forces’ firing on a wedding procession in Nangarhar province.

A man was killed in Maidan Wardak province last week when one person was injured in Kabul. 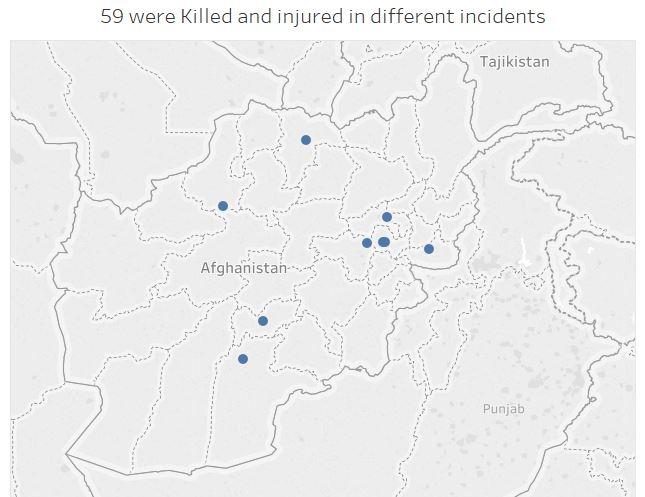 During the previous week, 17 people had been killed and 16 others injured in Afghanistan.

Before the regime change last year, hundreds of people were killed and injured on a weekly basis in Afghanistan.

Some renowned Afghan figures and polticans in the past government had fled the country after the regime change. But the caretaker government approved in March the formation of a ‘Commission to Contact Afghan Figures in Foreign Countries for Reconcilaiton. Last week, this commission officillly started functioning by announcing its operational strategy.

The commission said it would pave the way for the return of all political and military Afghan personalities from foreigncountrie. After their return, nobody will hve the right of their arrest or detention.

Some political commentators welcomed the formation of the Reocncilaiton Commission. However, they said the strategy regarding the political future of these personalies lacked clarity and the gvenrment should provide more details in this regrd.

Last week, UN Special Rapporteur for Human Rights in Afghanistan Richard Bennett said the formation of the ‘Commission to Contact Afghan Politicla Figures in Foreign Countreis was an opportunity for talks and empowermentof the incumbent government

But the Afghanistan National Resistance and Solvation Council, in its first meeting in Turkey, opposed the Reconciliation Commission and asked the government to explore honest ways of resolving the conflict through an interim administration and elections. Key figures in the past government such as Abdul Rab Rasoul Sayyaf, Atta Mohmmad Noor, Abdul Rashid Dostum, Haji Mohaqiq and Mir Rahman Rahmani are part of this council.

Earlier, the Solvation Council had asked the caretaker government for talks and if dialogue did not work, they could choose military action.

But Islamic Emirate spokesman Zabihullah Mujahid said no one would be allowed to threaten the people of Afghanistan in the name of resistance or on any other pretext.

He, however, explained the individuals involved in corruption for years had no place in the government and if they opted for military action, the authorities would move against them.

According to a government source, a strategy was being devised to convene a grand meeting of renowned Afghan figures. Individuals from different parts of the country would be invited to the meeting.

Some experts said onvening of the grand meeting would a positive step if all Afghans saw themselves represented.

Hezb-i-Islami Afghanistan (HIA) leader Gulbadin Hekmatyar stressed the need for a grand national council with clear support from the masses to take the country out of the current political crisis.

Hekmatyar believed the implementation of the caretaker government’s strategy for reconciliation with its opponents was weak and difficult to enforce.

But the National Resistance and Solvation Council has termed convening of the grand meeting a symbolic move. In a statement, the council said the proposed gathering and return of Afghan perosnalities to the country was a disgrace to them and to the wisdom of society.

On May 1st, a decree on hijab was issued by the Taliban’s supreme leader.

Women must cover their faces in public, according to the decree from the group’s leader, who called the all-encompassing burqa the ideal face covering.

Based on the hijab design of the caretaker government, every garment used for covering the body is hijab but the garment should not be thin and tight to reveal body parts.

The decree in this regard said that the chador, part of Afghan culture for centuries, was the best form of hijab.

The decree states; “If a woman ignores hijab, her house should be identified as the first response to the violation, then her family should be advised. If the violation is repeated, family members of the woman should be called and imprisoned for three days. In case of further in a statementuolations, family member (husband, father, brother) should be brought to justice.”

Hundreds of women in central Maidan Wardak province, at a gathering, supported the decree on hijab.

They criticised the women who were against the hijab decision. Similar gatherings in Zabul, Badakhshan and Paktia also supported the government decision.

Former president Hamid Karzai said that covering the face was not hijab and the all encompassing burqa was not part of the Afghan culture.

But the Ministry of Vice and Virtue says hijab is a divine order and Karzai’s remarks are not worth commenting on.

Last week, all male and female presenters of TOLONews wore musks on their programmes as a mark of protest.

Inamullah Samangani, spokesman for the government, asked: “The question is why advocates of diverse clothing have not raised their voice against the necktie.  If the necktie can be part of a uniform, why hijab cannot be?”

Deputy Foreign Minister Sher Mohammad Abbas Stanikzai told a gathering the system must be run on the basis of a moderate Sharia law, not by narrow-mindedness.

He added: “Girls/women are not given their right to education, where they will learn about Islam and the Sharia law. Of course, in schools and seminaries… half of the Afghan population and that they should be granted their rights based on Afghan culture and Islamic values

“If Afghanistan’s population is 40 million, then 20 million of them are women. Thus, women must be given their rights based on Islam and Afghan culture.”

The newly-appointed special rapporteur on the situation of human rights in Afghanistan, Richard Bennett, said the closure of girls’ schools above 6th grade, ban on women’s role in politics, restrictions on the freedom of expression and the decree on hijab were the things that somehow ignored the role of women in society.

In a statement, the United Nations Security Council (UNSC) expressed grave concern over restrictions on Afghan women and asked the caretaker government to honour its promises.

US Special Representative for Afghanistan Thomas West, in a meeting with Foreign Minister Amir Khan Mutaqqi, expressed global opposition to restrictions on women and said girls must be back in school, women free to move and work without curbs.

West added that he and US special envoy Rina Amir “conveyed unified international opposition to ongoing and expanding restrictions on women and girls’ rights and roles in society.”

But the caretaker government has frequently said that it was respecting the rights of women to education, work, etc in accordance with the Sharia law.

Last week, a memorandum of understanding was signed with a United Arab Emirates based firm for the control of Kabul, Kandahar and Herat airports.

The meeting stressed  that any development in Afghanistan must be Afghan-led.