Ulema gathering made no clear decisions on key issues: Analysts 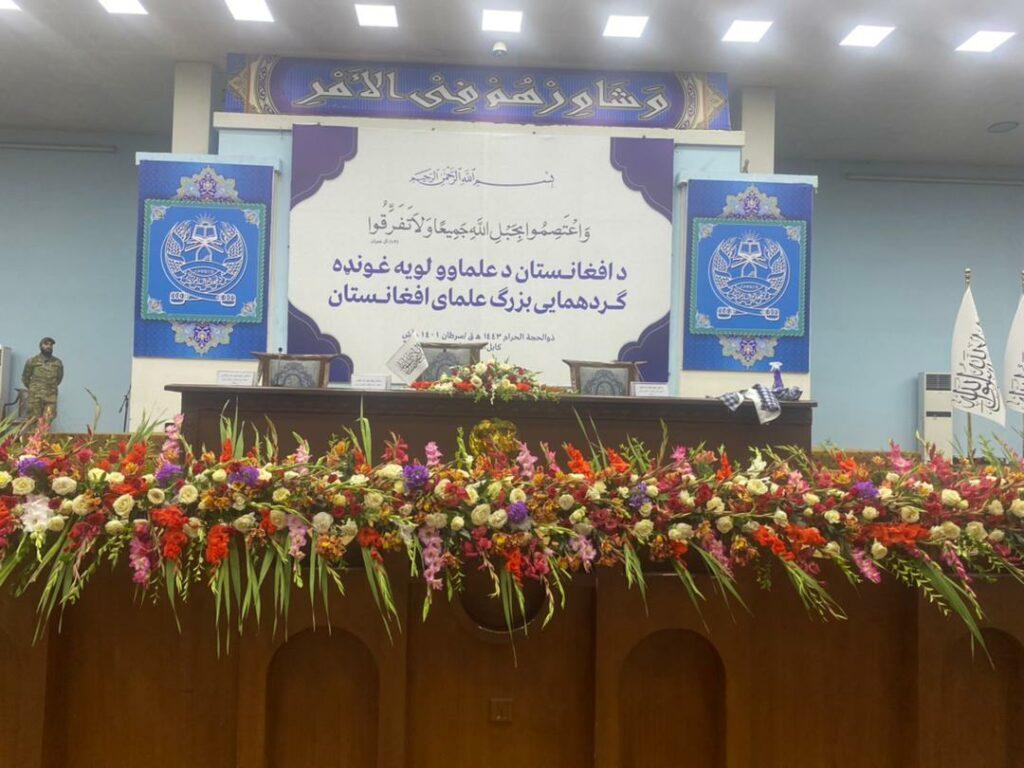 Ulema gathering made no clear decisions on key issues: Analysts

KABUL (Pajhwok): Some analysts and political figures say the recent gathering of religious scholars was a necessity, but the assembly should have made clear decisions on issues such as the opening of girls’ schools and the formation of a coalition government.

The three-day gathering of thousands of religious scholars and tribal elders ended in Kabul on Saturday by voicing support for the caretaker government.

More than 4500 religious scholars and tribal elders attended the gathering that began on Thursday and ended at 5pm Saturday by issuing an 11-artice resolution.

In their statement, the participants called on the international community especially Islamic countries to recognize the Taliban government and unfreeze the central bank funds.

They called on the Taliban government to pay special attention to the rights of minorities, children, women and the entire nation.

The participants renewed their allegiance to the Leader of the Islamic Emirate of Afghanistan, Mullah Haibatullah Akhundzada.

The participants said they strongly supported the decree issued by the Islamic Emirate against the cultivation, production, trafficking and use of narcotics.

“We call on the Islamic Emirate to promote justice, religious and modern education, health, agriculture, industry, the rights of minorities, children, women and the entire nation in the light of Islamic holy law, and comprehensive development, economic growth and pay special attention to uniform development.”

They urged the Islamic Emirate to strengthen national unity and maintain territorial integrity and take steps for the realization of national interests, alleviation of poverty and unemployment and welfare of the people.

Dr. Ghulam Farooq Azam, former advisor to the Ministry of Water and Power, said at the gathering that a country could not prosper without participation of women. He said women in the west felt that women in Afghanistan were not treated well, so their governments could not dare to recognize the Islamic Emirate.

“Don’t make it the issue of bin Laden to threaten your emirate. It’s a sharia act. Don’t deprive women of education and knowledge.”

The meeting’s resolution called for serious attention to women’s rights, but did not elaborate on the opening of girls’ schools.

He said the people of Afghanistan expected that the meeting would make a decision regarding the opening of all girls’ classes, discuss Afghanistan’s future system, approve the constitution and the national flag, and hoped that decisions will be made on Afghanistan’s economic problems, national and international relations, and national unity, but the meeting did not focus on these issues.”

The Ministry of Education had said work was underway on a plan and the girls high and secondary schools would be reopened once the plan was completed, but this has not happened yet.

Hezb-i-Islami leader Gulbuddin Hekmatyar also told the BBC it was the gathering of the Islamic Emirate supporters and to know the views of scholars. “In any case, it was a good development and it was needed.”

He said that Afghanistan needed an authoritative council that could represent the entire nation and make final decision on all national issues.

Hekmatyar also said that the government should create conditions for the reopening of girls’ schools, something not difficult to do.

“The clear answer in the light of Islam that girls should not be deprived of their inalienable right which God and religion has given to them,” he said.

He said families who wanted their daughters to go to school would leave Afghanistan. “They will go to other countries, this is an important issue for us,” he said. “The expectation was that it would be discussed at the gathering of scholars.”

He also said that Afghans should stay in the country and their problems should be heard, their concerns addressed and their demands responded positively.

Political analyst Qazi Mohammad Hassan Haqyar said that a number of important issues were discussed in the resolution.

Referring to Article 9 of the resolution, he said: “Perhaps the issues of opening girls’ schools, giving women the right to participate in all spheres and the formation of an inclusive government would have also clearly stated. There is not as much clarity in the resolution as there should have been.”

According to him, the government should open schools for all girls and provide jobs to women in accordance with Sharia and this is in the interest of the government.

Abdul Sattar Saadat, the head of the Electoral Complaints Commission (ECC) during the previous government, wrote on his Twitter account about the gathering of scholars that the issue of girls education should have been clearly discussed as it would have enhanced the national and international credibility of the event. “But still a great work has been done.”

But Zabihullah Mujahid, a spokesman for the Islamic Emirate, said the problem of girls’ schools and women’s work would be resolved keeping in view the situation.