KABUL (Pajhwok):  At least 73 people were killed and injured in the country in the past two weeks when 32 million dollars assistance arrived and the international community pledged another 86.5 million dollars in aid to Afghanistan.

Casualties in the last two weeks

In the last two weeks, unidentified gunmen killed seven members of a family, including women and children, and injured two others in Paghman, Kabul.

Five children were injured in the last two weeks due to explosion of unexploded ordnance in the capital of Uruzgan, Tarinkot and Dehrawud district, and unknown gunmen killed one person in Dehrawud district.

In addition, one person lost his life in Kandahar and Ghor provinces due to the detonation of unexploded ordnance.

According to reports, one child was killed, another was injured and two people were killed by unidentified gunmen in Ghazni city.

Also in the last two weeks, dead bodies of two men turned up in Parwan and Baghlan. Unidentified gunmen killed four people in Logar, two in Baghlan and Farah and injured another.

Elsewhere, unidentified persons opened fire on the worshipers in Lashkargah, the center of Helmand, as a result of which one person was killed and three others were injured.

Unidentified armed men attacked a vehicle belonging to Al-Farooq Corps in Herat, killing two people and injuring several others. However, a family member of the victims of the said incident said that three people were killed and 20 others were injured in the attack. 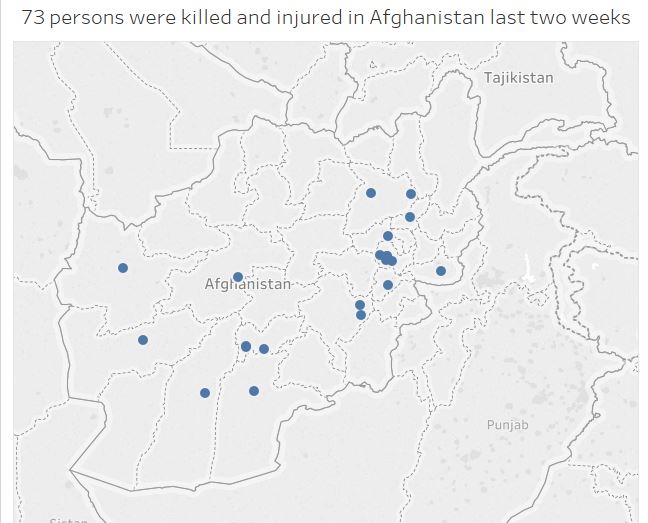 Three weeks ago, according to Pajhwok reports, 26 people werekilled and eight others were injured in the country.

Before the regime change in August last year, hundreds of people would get killed and injured in the past conflict.

Human Rights Watch said last week more than 100 suspected Daesh militants had been killed after going missing and their bodies dumped in canals in eastern provinces, but the government rejected the report as untrue.

Interaction between the world and Afghanistan

Though no country has so far recognized the Taliban caretaker government, yet there is some kind of interaction between the government and the world.

Last week Uzbekistan acting Minister of Foreign Affairs said his country would host a conference on Afghanistan, in which representatives of the Taliban and delegates from 20 countries would be invited.

Earlier this week, Anton Lavrov, the deputy ambassador of Russia in Kabul, while emphasizing on the development of relations between Kabul and Moscow, said that his country is willing to cooperate with Afghanistan in economic and political fields.

Pakistan’s Foreign Minister Bilawal Bhutto Zardari spoke with US Secretary of State Anthony Blinken last week about reducing the humanitarian crisis in Afghanistan and interacting with the caretaker government of Afghanistan.

According to reports, last week Afghanistan’s Acting Minister of Defense Maulvi Muhammad Yaqub Mujahid discussed defense and security cooperation between the two countries with the Emir of Qatar and other civil and military officials.

However, US Assistant Secretary of State for south and central Asia, Donald Lowe, said it was premature to recognize the new government of Afghanistan.

US State Department spokesperson Ned Price said the US desired to witness the establishment of a permanent political system in Afghanistan through peaceful means.

However, Islamic Emirate of Afghanistan spokesman Zabihullah Mujahid in response said the government was unmoved by the US decision.

Officials of the acting government said Afghanistan wanted to have good, positive and reliable relations with all countries in the diplomatic and commercial fields. They say there has been progress in interaction with the international community and the government has completed the conditions for recognition.

Also, the World Food Program approved the purchase of 120,000 tons of wheat for Afghanistan and the United Nations signed a $20 million aid agreement with the World Bank to build the capacity of non-governmental organizations and civil societies in Afghanistan.

Ahmad Masoud, the leader of the Resistance Front, said in an interview with the BBC that talks were the solution  Afghanistan’s crisis, not war and violence. He emphasized that if “Taliban” do not believe in talks, they have no other choice but to stand against them.

Former President Ashraf Ghani, in his Eid message, asked the scholars of the Islamic world to argue with the Taliban.

They add Afghanistan’s development is the shared responsibility of all Afghans  and the arms of the new government are open to all.

“Closed schools for girls should be opened”

The government has closed girls’ schools above sixth grade and says a plan in this regard is being devised, but months on the plan is yet to be revealed.

Last week, a campaign was launched on social media to open closed girls’ schools above the 6th grade in Afghanistan.

Former presidents Hamid Karzai and Ashraf Ghani in their Eid messages and Dr. Abdullah, the head of the National Reconciliation Council of the previous government, during a meeting with the political deputy of the UN Secretary-General’s Special Representative for Afghanistan and the deputy head of UNAMA, Marcus Putzel, insisted on the reopening of girls schools in the country.

In addition, the United Nations Human Rights Council also asked the Afghan authorities to pay attention to the basic rights of Afghan women and girls.

In a new ranking by the World Economic Forum, Afghanistan has been called the worst country for women among 146 countries in the world.

Prime Minister of Afghanistan Mullah Muhammad Hassan Akhund said in his Eidul Adha sermon said that the government of Afghanistan was committed to women rights as enshrined in Sharia.

Sher Mohammad Abbas Stankzai, political deputy of Afghanistan’s Ministry of Foreign Affairs, said last week that women could not be ignored as an important part of society. According to him, women have the right to play an active role in every sphere of life, including politics and economy.

Last week, the BBC published a report that the British Special Forces repeatedly killed prisoners and unarmed people in Afghanistan under suspicious circumstances.

Amnesty International has called for an immediate investigation into allegations of war crimes committed by British special forces in Afghanistan.

A researcher of the organization’s South Asia branch said, the BBC’s findings were horrific and clearly showed the challenging level of impunity and non-responsibility of British soldiers who served in Afghanistan.