KABUL (Pajhwok): At least 57 people were killed and injured in the country last week, when a US drone killed Al Qaeda supreme leader Ayman al-Zawahiri whose assassination made headlines worldwide.

Last week, 25 people were killed and 32 others were injured in separate incidents of violence including bomb blasts across Afghanistan.

Eight civilians were killed and another 18 injured on Friday when a bomb planted in a hand-cart went off in a street in Sarkarez area of Kabul city. Reports show ISIS has claimed responsibility for the attack in the Shiites-dominated area.

Four alleged militants and two police officials, including a female police officer, were killed and four others were injured during a security forces’ operation in the third security district of Kabul city.

Unidentified gunmen killed two people in Kabul, including a former manager of the nursing department of Istiqlal Hospital.

According to reports, armed robbers killed a money-changer in central Parwan province and four people were killed by unidentified gunmen in Kunar, Ghor and Nangarhar provinces during the week.

Also, eight people were injured in Helmand and Logar due to explosions of unexploded ordnance, and one person was killed in a landmine blast in Parwan.

Local officials in central Daikundi province said a ‘political prisoner’  committed suicide in prison and in Nimroz, an Afghan soldier was killed and two others were injured due to a clash between the border forces of Afghanistan and Iran.

Officials said the prisoner in the Daikund jail told the guards that he was sick and a doctor administered him a intravenous drip, but the prisoner killed himself by using the pipe of the drip.

These casualties are based on Pajhwok reports and the news agency may not have received reports about some incidents. 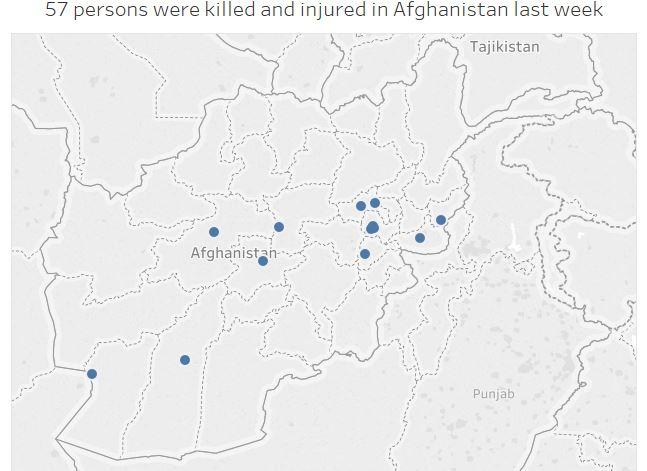 In the previous week, 17 people were killed and 23 others were injured in Afghanistan.

In the past conflict before August 15, hundreds of people would get killed and injured in violence every week.

The killing of Ayman al-Zawahiri

Last week, there was an attack in the Sherpur area of ​​the 10th district of Kabul city on Sunday at 6:30 am. The Ministry of Interior said at the time that a missile hit the area, but there were no casualties.

However, on Monday, US President Joe Biden announced that al-Qaeda leader Ayman al-Zawahiri was killed in a US drone strike in Kabul.

On the first day, the caretaker government of Afghanistan, without saying anything about the killing of Ayman al-Zawahiri, confirmed the drone attack in Sherpur area, calling it against national sovereignty, international principles and the Doha agreement.

Later, the Islamic Emirate issued a statement, saying they had no information about entering and living of al-Zawahiri in Kabul.

The statement said the leadership of the Islamic Emirate of Afghanistan had directed the detective and intelligence agencies to conduct a comprehensive and serious investigation into the various aspects of the incident.

According to reports, Canada and Saudi Arabia welcomed the drone strike that Washington says killed al-Zawahiri.

Pakistan neither welcomed nor condemned the killing of Ayman al-Zawahiri, only saying that they condemn any kind of terrorism.

The European Union said the killing of Ayman al-Zawahiri in Kabul raised doubts about Kabul’s intentions, but China said in this regard that cooperation against terrorism should not harm the sovereignty of other countries.

After the attack, the United States issued a worldwide alert, advising its citizens exercise high vigilance when traveling abroad because the possibility of anti-American violence has increased.

In addition, Qatar asked Afghanistan and the United States to be remain committed to the Doha Agreement and to maintain the achievements.

The protestors condemned the drone strike and called it an attack on the territory of Afghanistan.

Last week, Sardor Umurzakov, deputy prime minister and minister of investments and trade, in a meeting with Afghanistan’s Acting Minister of Foreign Affairs Maulvi Amir Khan Mottaki, said that the railway survey work between Uzbekistan, Afghanistan and Pakistan would be launched this week in Afghanistan.

Last week, a Chinese oil and gas extraction company and the Afghanistan State Oil and Gas Company signed a contract of 200 years for the purpose of extracting oil from Qashqari.

Japan again assured completion of incomplete projects in Afghanistan and the United Nations said despite challenges, Afghanistan was not in a hopeless situation.

The school year started in March this year and on the very first day, the Taliban government postponed the opening of girls’ high schools and secondary schools and said that they were working on a plan to open these schools, but this has not been done yet.

Last week, a visiting delegation of Pakistani scholars said that the caretaker government of Afghanistan had promised to open girls’ schools soon.

Also, a number of women’s rights organizations in Kabul asked the government to open girls’ schools above the sixth grade.

Anas Haqqani, a senior member of the Islamic Emirate, said that the problem of girls’ schools closure was not permanent and the government would solve this problem after completing some tasks.