KABUL (Pajhwok): Some major countries traded barbs with the US over Afghanistan last week, when the entry of US drones into Afghanistan’s territory sparked discussions and different countries once again insisted on the opening of girls’ schools.

Last week, 38 people were killed and 61 others were injured in separate incidents of violence across the country including bomb blasts.

A blast inside Guzargah Mosque in Herat city killed 18 people including a prominent pro-Taliban cleric Mualvi Mujib Rahman Ansari and injured 23 others.

Before the blast, security forces claimed killing three Daesh militants in Herat city during an operation.

One member of a family was killed and another injured as a result of a celebratory firing in Rabat Sangi district of Herat province.

One person lost his life and 21 others were injured in a dispute over water in Nawa district of southern Helmand province last week.

A ‘mental patient’ in Parwan shot dead two people, including a security person and injured two other security men.

A similar incident took place in Uruzgan province where a mentally retarded person climbed the mountain and shot injured two residents. He also shot dead two security personnel who tried to capture him.

In Faryab, unidentified gunmen killed two people including a woman and armed robbers killed a son and his father in Parwan, and a person stabbed and killed his father in Paktika after a verbal dispute.

One person was killed and five others were injured as a result of a landmine blast in eastern Kunar province last week.

A sticky bomb attached to a car went off in Kabul, killing two people and injuring three others. In Baghlan, one child lost his life and two others were injured due to an explosion of unexploded ordinance.

The dead body of a doctor was found in Kabul city and a person who was kidnapping a girl was shot injured by security forces after he did not stop his vehicle.

These casualties are based on reports reaching Pajhwok Afghan News and it is possible some incidents went unreported or sources have not shown the exact number of casualties. 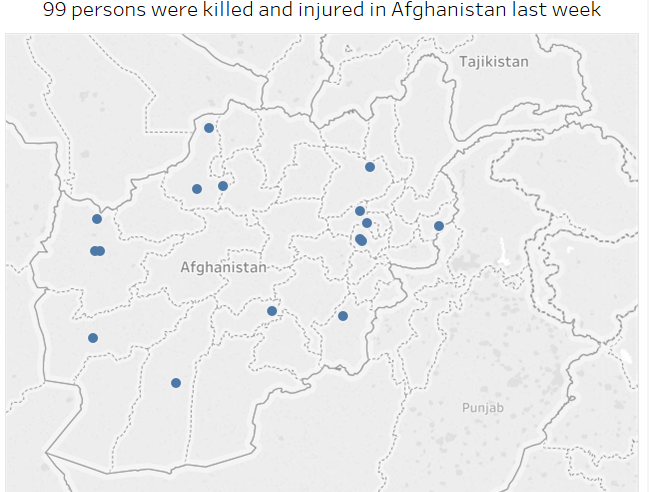 In the previous week, 15 people were killed and seven others were injured in various incidents of violence across the country.

Hundreds of people would get killed and wounded in the conflict every week before the regime change last year.

Last week, Acting Defense Minister Maulvi Muhammad Yaqub Mujahid said their information showed US drones entered Afghanistan from Pakistan’s territory and Islamabad should not allow its airspace to be used against Kabul.

In response, Pakistan said such speculative accusations without any evidence were regrettable and against the conduct of responsible diplomatic principles.

He said Pakistan could not prevent or acknowledge the drones’ entry because the vast majority of Pakistani people were against drone strikes and they did not want the use of Pakistan’s land and airspace against Afghanistan.

According to him, the second possibility is that these drones are coming from Tajikistan, which has handed over an airbase called Farkhar to America.

Last month, US president Joe Biden announced that Al Qaeda leader Ayman al-Zawahiri had been killed in a US drone attack in Kabul.

But the acting government of Afghanistan said the killing of al-Zawahiri was still a claim and it was investigating the claim as the body of al-Zawahiri remained untraced.

Taliban officials said US drones still flied over Kabul, something they called a clear violation of Afghanistan’s airspace and added that talks in this regard were ongoing with American officials

Some countries trade barbs over Afghanistan

Britain’s ambassador to the United Nations, James Kariuki, said Russia invaded Afghanistan and fought for ten years, which led to the civil war and emergence of Taliban.

Russia’s ambassador to the UN, Vassily Nebenzia, sharply criticized the “ignominious 20-year campaign” by the United States and its NATO allies in Afghanistan at the UNSC meeting on the eve of the first anniversary of foreign forces withdrawal from Afghanistan.

He claimed they did nothing to build up the Afghan economy and their presence only strengthened the country’s status “as a hotbed of terrorism” and narcotics production and distribution.

Nebenzia also accused the US and its allies of abandoning Afghans to face “ruin, poverty, terrorism, hunger and other challenges.”

“Instead of acknowledging their own mistakes and supporting the reconstruction of the destroyed country,” he said, they blocked Afghan financial resources and disconnected its central bank from SWIFT, the dominant system for global financial transactions.

China’s UN Ambassador Zhang Jun also accused the US and its allies of “evading responsibility and abandoning the Afghan people” by cutting off development aid, freezing Afghan assets and imposing “political isolation and blockade.”

To Russia’s claims that Afghanistan’s problems are the fault of the West and not the Taliban, US ambassador to the UN Thomas-Greenfield asked, “What are you doing to help other than rehash the past and criticize others?”

She said Russia has contributed only $2 million to the UN humanitarian appeal for Afghanistan and China’s contributions “have been similarly underwhelming.”

“If you want to talk about how Afghanistan needs help, that’s fine. But we humbly suggest you put your money where your mouth is,” Thomas-Greenfield said.

The United States has frozen more than 9 billion dollars of Afghanistan’s central bank’s reserves, of which seven billion is in the United States and the rest is in other countries.

Former US Secretary of State Mike Pompeo, said the hasty withdrawal of troops from Afghanistan had discredited the US, but US Defense Secretary Lloyd Austin decided to send forces to the country for the purpose of self-defense. He added that America’s work in Afghanistan was not yet finished.

Rights of women and girls

At the UNSC meeting on Afghanistan, the UK  Albania, Norway and China, the UN ambassadors in Afghanistan and the head of the Afghan delegation to the United Nations insisted on giving women and girls their right to work and education in Afghanistan.

Markus Potzel, Deputy Special Representative of the UN Secretary-General in Afghanistan, said that Afghanistan was the only country in the world where girls were not allowed to go to school. He insisted on the re-opening of girls’ schools in the country.

EU foreign policy official Josep Borrell criticized the continued closure of girls’ higher and secondary schools in Afghanistan and said that the Islamic Emirate was breaching its promise and had deprived girls of education.

Last week, in a four-day meeting of Afghan women and representatives of some international organizations in Turkey expressed their concern about the lack of access to education and work for some Afghan girls and women.

They asked the international community to support Afghan women’s rights organizations in Afghanistan and outside the country.

Markus Potzel said Afghanistan was a part of the global system, so its acting government should adhere to international obligations.

Taliban officials have repeatedly said they are committed to all human rights of the people; their rights are better protected than before. They say women are given all their rights within the framework of Islamic Sharia, and at the moment in institutions where the need is seen, women are employed and some others are paid at home.

The school year started in Afghanistan in March and the same day the caretaker government postponed the opening of middle schools and high schools for girls.

The government has said it is working on a plan and all girls schools would be reopened after completion of the plan, which is yet to be done.

In the past 12 months, the level of such aid to Afghanistan has reached hundreds of millions of dollars.

This is while the United Nations Refugee Agency says that more than half of the people of Afghanistan are in need of aid.