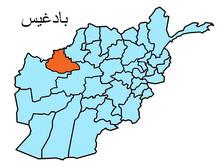 QALA-I-NAW (Pajhwok): Three children were killed in an explosion in northwestern Badghis province on Friday morning.

The blast resulted from unexploded ordnance in the Kharistan area of Maqur district, the police headquarters said in a statement.

It added some children collected unexploded ordnance around the former government’s checkpoints in the area and hit the devices with a stone.