KABUL (Pajhwok): The United States says trust is being built with the Afghanistan interim government while Kabul at the same time has also discussed formal interaction and high-level exchanges with Beijing.

At least 29 people were killed and 15 others injured in various incidents of violence across the country last week.

Six Daesh affiliates were killed, two captured alive and one security man was also killed and another injured during an operation last night in Kabul, the acting government said.

Kabul police said one person was injured in a roadside explosion in Kabul city. Five militants were killed during a security forces’ operation in Kunduz and unknown gunmen killed a teacher in Farah province.

Explosions from unexploded devices killed one person each in Sari Pul, Farah and Faryab provinces and killed three children in Badghis province.

In Deh Yak district of Ghazni province, three people were killed and five others were injured in a clash between two families over a land dispute.

The number of these casualties is based on reports reaching Pajhwok Afghan News and some incidents might have gone unreported or sources provided incorrect figures. 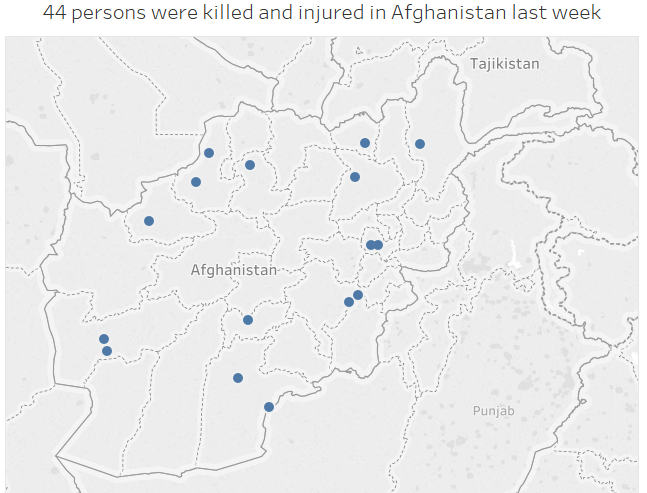 In the previous week, 16 people were killed and 15 others were injured in various incidents of violence nationwide.

Hundreds of civilians, security forces and insurgents would get killed and injured in the past conflict every week before the regime change last year.

Last week, US special representative for Afghanistan Thomas West said trust was building with the Afghan caretaker government, but Afghanistan would not be allowed to once again become a safe haven for ‘terrorist groups’.

The Afghan Embassy in China on its twitter account wrote that ambassador Syed Mohiuddin Sadat met with Cheng Sung at the Asian office in China’s foreign ministry.

They conferred on humanitarian and development assistance and some other matters of mutual interest.

In Turkey, a conference of religious scholars was held in which scholars were asked to play a positive role in strengthening political, economic and cultural relations between Islamic countries and the caretaker government of Afghanistan.

However, Zabihullah Mujahid, a spokesman for the Taliban acting government, said the West, particularly the United States, was against the recognition of their government.

He said some Islamic countries could not recognize the Afghanistan government under pressure from the United States.

Mujahid emphasized on Afghanistan’s good relations with America and Europe. He said the Islamic Emirate had tried and was trying to be recognized.

The academic year began in March, but the caretaker government postponed the opening of middle schools and high schools for girls, saying they were working on a plan in this regard, something yet to be done.

However, Zabihullah Mujahid told the gathering of religious scholars in Turkey that the opening of all girls’ schools in Afghanistan was certain and the curriculum was being reformed and a separate education system for girls being created.

This comes amid widespread requests from inside and outside the country to open girls’ schools.

In a joint statement, the US, UK, Qatar, Australia, Bangladesh, Belgium, Canada, Chad, France, Germany, Greece, Hungary, Indonesia, Ireland, Italy, Japan, Lebanon, Lithuania, Norway, Sri Lanka, Turkey, Turkmenistan and some other countries, including the United Arab Emirates, have called for the opening of secondary schools for girls in Afghanistan.

However, the caretaker government has asked neighboring countries and the international community not to interfere in Afghanistan’s internal affairs.

The Islamic Emirate says it has principles in political, cultural, social, economic and educational fields and regards itself responsible for resolving people’s problems.

Last week, many countries in the UNSC meeting titled ‘Women, Peace and Security’ emphasized that women should be given all the rights. The Taliban say they are committed to all women’s rights enshrined in Sharia.

US Ambassador to the United Nations Linda Thomas Greenfield said they were working to respond to what she called unacceptable policies (of the Taliban) and to raise the voice of women.

“A consultative mechanism has been established between America and Afghanistan. This mechanism includes voices from all walks of life, including women and civil activists”.

United Nations Deputy Secretary-General Amina Mohammed has said the world’s body is interacting with Taliban officials in Afghanistan to support all Afghans regardless of their gender.

China’s deputy permanent representative to the UN Geng Shuang has said his country is upbeat Afghan women will get their basic rights. He hoped the Afghan women would also participate in the economic and social sectors and become important force in the peace and reconstruction process of their country.

India’s deputy permanent representative to the UN R.Ravindra said: “We want women and minorities in Afghanistan to participate in their country’s future and their rights are fully respected.”

Islamic Emirate spokesman Zabihullah Mujahid says no threat exists to the lives of Afghans and their rights are protected. He adds thousands of courts have been established in provinces and districts to ensure people’s rights and serve them. If anyone has a complaint, he should move the court.

The United Nations is assisting 38 percent of the country’s population by providing them with agricultural goods in order to help overcome the hunger crisis in Afghanistan.

A package of 40 million US dollars arrived in Kabul last week as part of international humanitarian aid. The United Nations says it delivered more than one billion dollars to Afghanistan in the past one year to assist the Afghans.

Tajik president Emomali Rahmon last week said that to curb security risks, it was necessary to build a security belt around Afghanistan. Rahmon added that terrorists try to cross the Central Asian borders.

But Bilal Karimi, deputy spokesman of the Islamic Emirate, said: “From our territory there is no threat to other countries. We have properly secured our borders with other countries.”