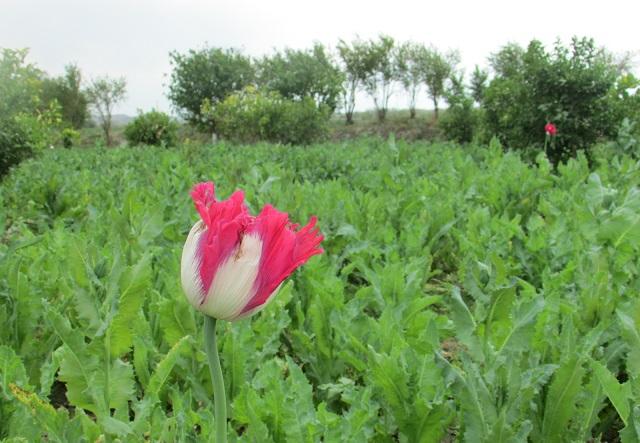 KABUL (Pajhwok): The Ministry of Interior (MoI) has termed the UN Office on Drugs and Crime (UNODC) report on the cultivation and production of opium in Afghanistan imaginary and far from the truth.

The ministry said that the UNODC conducted a survey against all standards and without the coordination of the government, whose figures are imaginary and baseless.

According to UNODC findings, cultivation of opium poppies in Afghanistan increased by 32 per cent over the previous year, to 233,000 hectares – making the 2022 crop the third largest area under cultivation since monitoring began.

Cultivation continued to be concentrated in the southwestern parts of the country, which accounted for 73 per cent of the total area, and registering the largest crop increase.

In Helmand province, one-fifth of all arable land was dedicated to opium poppy cultivation.

The authorities banned all cultivation of opium poppy and all narcotics under strict new laws, in April 2022.

Opium is the essential ingredient for manufacturing the street drug heroin, and the class of medical prescription opioids which millions rely on for pain medication worldwide. Opioids have also been increasingly abused, causing widespread addiction issues in countries such as the United States.

This year’s harvest was largely exempted from the decree, said UNODC, and farmers in Afghanistan must now decide on planting opium poppy for next year amid continued uncertainty about how the Taliban will enforce the ban.

Sowing of the main 2023 opium crop must be done by early November this year.

But the Counter-Narcotics Department of the MoI in a statement said: “The threats caused by drugs besides poverty in Afghanistan remained one of the great challenge that have been inherited by the Islamic Emirate of Afghanistan (IEA) and combating it like poverty was one of the priorities of the IEA, world and  especially the UN.”

It added: “The UNODC was established in 1997 by the Secretary General of the UN, with the aim of drug control, crime prevention and countering global terrorism, deals with the issue of drugs and the fight against it. After the take over by the IEA, the UNODC ignored and carried out its activities unilaterally without coordinating the fight against narcotics from outside countries.”

The statement added: “It can be noticed in the above case that, the duties and responsibilities of the UNODC office based on its existential philosophy and the memorandums they had with the Afghan government regarding the monitoring of illegal cultivation, providing technical facilities and improving the capacity of the human resources of the Afghan government about launching surveys, drug research and analysis, the aforementioned office has turned into an executive body for launching drug surveys without the coordination of IEA, against all its standards and mission, and published imaginary and arbitrary figures without a source or basis.”

The report talked about the government’s decree which clearly stated that after the decree is issued, the cultivation, production, smuggling, use, purchase, sale, etc. of narcotic drugs is prohibited and this decree came into force when the 2022 poppy crop was harvested.

Also, the source writes, in 2022 survey, the samples taken in 2021 were used, and at the same time, the satellite images for detecting poppy fields were also very low.

According to the information of the IEA, this survey has not been physically conducted in the provinces affected by poppy cultivation, the estimation of opium production required the presence of pre-trained evaluators in the field, which has not been realized, the selection of poppy fields with different qualities, measurement Capsules, quarantine of the intended area for collecting poppy juice requires sufficient time and complicated technical steps, based on which, the production of opium in one hectare of land is determined in kilograms; Therefore, according to the above reasons, it can be said that the figures of this survey were not based on accepted methods and these statistics were added and multiplied based on personal and political tastes and then published, which are imaginary and far from the truth.”

The MoI has asked the UNODC to refrain from publishing reports that has no bases and work in coordination with the MoI technical teams in fighting drugs and crimes.