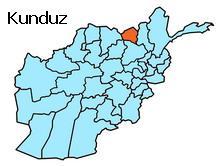 KUNDUZ CITY (PAN): Foreign troops captured a senior Islamic Movement of Uzbekistan (IMU) along with two of his associates during an operation in northern Kunduz province, an official said on Saturday.

The detainee was involved in a series of assaults on Afghan and foreign forces in northeastern Afghanistan‘s Quetta city.

A resident of Chahar Dara district, Abdul Akbar, said that Qari Bilal had been a dreaded militant leader in the area over the past three years.

“Qari Bilal was given special treatment at Taliban‘s meetings in the Chahar Dara district, where the militants had a training centre in the Ainul Majar town until six months back.”

Meanwhile, the International Security Assistance force (ISAF) confirmed the capture, saying Afghan forces were part of the operation, which was conducted after several weeks of intelligence gathering and coordination.

“The targeted leader is a key conduit between the senior IMU leadership in Pakistan and senior Taliban leadership in Afghanistan.  He assisted both groups by directing insurgent movement for training and operations between the two countries…” the NATO-led force said in a statement.