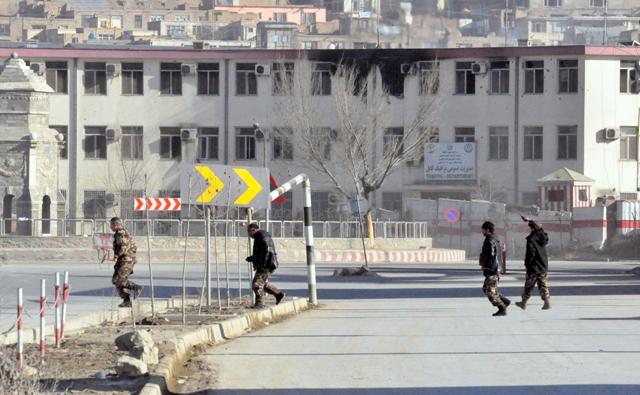 KABUL (PAN): Three policemen and five attackers were killed and a dozen others wounded during a nine-hour clash that erupted as a group of suicide bombers stormed the Kabul traffic police headquarters on Monday morning, officials said.

Five Taliban militants sneaked into the compound after shooting dead three unarmed policemen in the Deh Mazang locality of the capital at 5:30am, entering a fierce gunbattle with security personnel.

He said: “The clash lasted nine hours because there were important documents in the department. We, therefore, fought carefully against the assailants to prevent the documents from being damaged.”

Three rooms, where there were no such documents, were burnt during the fire exchange fire, the Kabul police chief explained, rejecting reports that the attackers had gained control of a weapons depot next to the building. There was no ammunition dump in the area, he insisted.

“I was washing vehicles in a nearby area when five people disembarked from a car, killing two policemen and hitting the traffic compound with a rocket,” witness Kifayatullah said. After entering the building, the attackers opened fire on civil order police and border police headquarters.

As usual, The Taliban claimed responsibility. The group’s spokesman, Zabihullah Mujahid, said four fighters armed with suicide vests and weapons entered the building, targeting the police headquarters and other installations.

He identified the assailants as Mohammad Nabi from Ghazni province, Amir Khan from Nangarhar, Habibullah from the Deh Sabz area of Kabul and Abdul Latif from Baghlan.

Two dozens of Afghan and foreign forces, including international trainers and Quick Reaction Force officials, were killed and 31 others wounded in the clash, Mujahid said.