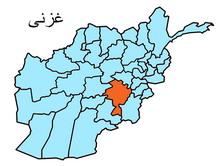 GHAZNI CITY (PAN-designated district chief was killed during an overnight clash with police in the southern province of Ghazni, an official said on Thursday.

The body of Jan had been taken to hospital, Zahid said, accusing the slain individual of behind many attacks and explosions and a recent blast that killed a policeman and three civilians in Ghazni city, the provincial capital. A dozen others were wounded in the blast.

But the Taliban said Adam Khan was a prayer leader at a mosque in Andar and had no links with the movement.

The group spokesman, Zabihullah Mujahid, said Khan was killed during a joint raid involving police and foreign troops on his house on Wednesday night. The joint forces had stolen valuable things from the imam‘s house, Mujahid alleged.