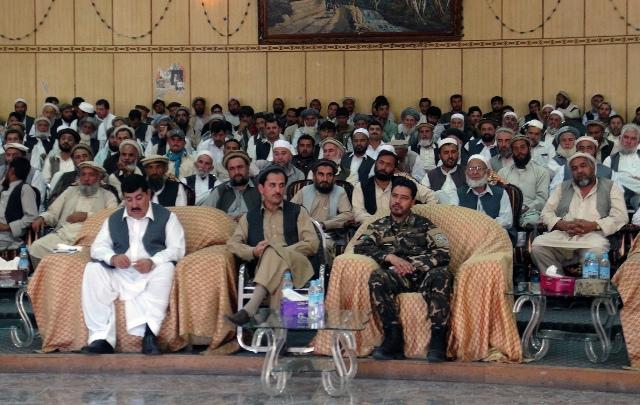 For his part, Dr. Zia promised a fair probe into the complaints. He said the delegation would meet different tribal elders and representatives of protestors.

Abdul Zahir Qadir, a member of the Wolesi Jirga and a powerful figure in the east, has led the protestors to block a number of roads across the city over the past two days.

In the afternoon, youths and elders took to the roads and closed the highway in the 4th Farm area of Batikot district. The protestors chanted slogans against the governor and called for his accountability.

Col. Hidayat, the district police chief, confirmed the highway’s blockade, saying they had taken measures to ensure the security of protestors.

Political commentators, meanwhile, warned the long-simmering Qadir-Sherzai tussle could lead to a crisis in the province. Analyst Eng. Zarghoon Shah said: “It’s a war of personal interests. Some of the people are paid by the governor, while others are supportive of Haji Zahir.”

Kabul University teacher Lal Pacha Azmoon said the ongoing confrontation was against the Karzai administration. If the situation persisted, similar protests could erupt in other provinces as well, he feared, saying the central government could also be dislodged.

“Two powerful individuals have locked horns. One of them will eventually fall. As a result of divisions among its residents, Nangarhar will slide into a disaster,” he remarked.