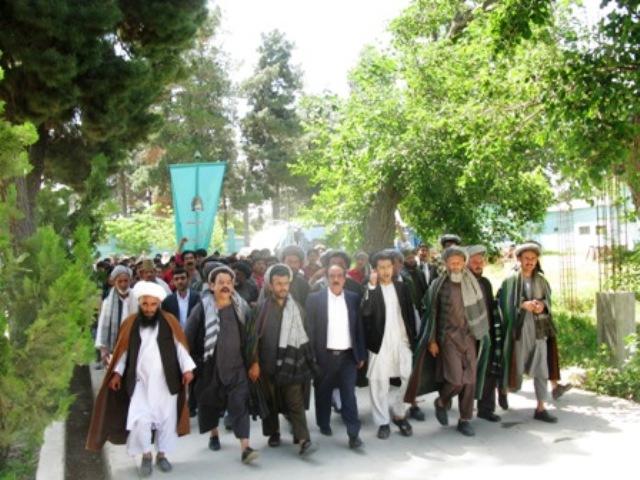 MAIMANA/GHAZNI CITY (PAN rallies continued on Saturday in major Afghan cities against the May 1 border skirmish between forces of the neighbouring countries near their shared frontier.

Political and civil society took part in the rally in Maimana, the capital of Faryab. They were chanting slogans against Pakistan.

“We would not allow anyone to attack the Afghan territory and Pakistan’s military should know its intervention in our country’s affairs would produce nothing, but a defeat for them,” said one of the speakers, Maulvi Asadullah Jamali.

Supporting the people of Goshta district in eastern Nangarhar province, where the Pakistanis has allegedly built a security gate, he said: “They would not hesitate, just like Mohammad Qasim Khan, to sacrifice their lives.”

Qasim Khan, a border police officer killed in the first border skirmish, was posthumously awarded the Medal of Courage by President Hamid Karzai on Thursday.

He was killed during the seven-hour clash in the Konsari area, but Afghan borders guards were able to destroy a Pakistani checkpoint and a border gate. The skirmishes have sparked protests in a number of Afghan cities.

“The current tension is due to Pakistan’s increasing interference. Pakistan should stop attacks inside Afghanistan,” said Dur Taj, a Faryab provincial council member.

There was another anti-Pakistan rally in southern Ghazni province on Saturday. Ghazni University students, who took out the rally, announced their support for Afghan forces against Pakistan.

One of the protestors, Mohammad Anwar, said Pakistan had committed a blunder by attacking Afghan forces, saying the entire nation would back its armed forces in the defence of the motherland.

The students asked Afghan traders to cut off trade ties with Pakistan in order to weaken its economy and collapse its industries.

Afghanistan has sent hundreds of troop reinforcements to the border in recent days, accusing its neighbour of building a military border gate in the mountainous Goshta region.

Pakistan denies any encroachment, saying the gate lies on the Durand Line, the frontier established by British diplomat Mortimer Durand in 1893.