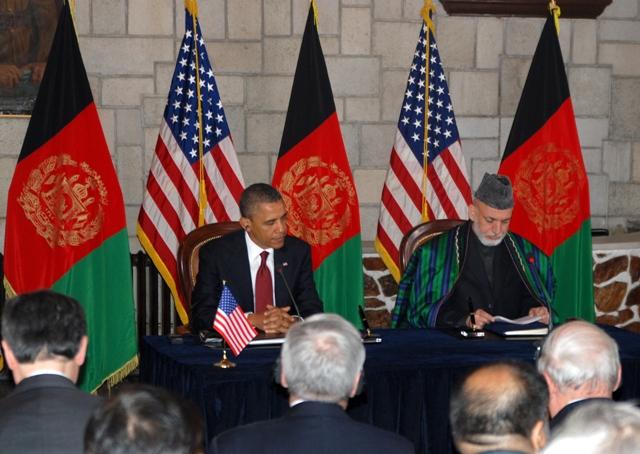 “Negotiators from both sides have made a significant progress in completing the text of the agreement during informal talks in Washington. These informal discussions will continue in Kabul, led by our Embassy there,” a State Department spokesperson told Pajhwok Afghan News.

Since November last year, when the Afghan-US BSA negotiations began, Afghan Ambassador to the US, Eklil Hakimi has been leading the Afghan side and the American side by James Warlick, the Deputy Special Representative for Afghanistan.

The negotiations were about to be completed and the text nearly closed, but President Hamid Karzai suspended the talks after the Taliban opened their political office in Doha.

While the talks are yet to resume officially, Hakimi and Warlick continue to be engaged in informal talks now being done in Kabul and have been elevated to a higher level. The informal negotiations from the American side are being led by US Ambassador to Afghanistan James Cunningham and US Commander in Afghanistan, General Joseph Dunford.

The Afghan side is led by the National Security Advisor, Rangin Dadfar Spanta, and Dr Ashraf Ghani, the Transition Commission Chairman. It is understood that the four – Cunningham, Dunford, Spanta and Ghani – are now looking at some of the contentious issues like immunity for the US soldiers and territorial integrity of Afghanistan.

“We look forward to concluding the BSA as soon as possible,” the State Department official said.

“As we’ve noted before, President Obama and President Karzai have committed to concluding a Bilateral Security Agreement as soon as possible, reaffirming that such an agreement is in both countries’ interest,” the spokesperson said.

Those familiar with the negotiations of the text said that it is a “balanced” one and protects the interest of Afghanistan. After 10 months of negotiations only a few outstanding issues remain. Once these issues are resolved, Karzai will convene a Loya Jirga for approval. The text would be ready for signature after incorporating the view of the Loya Jirga.

While the US insists that it would like to close the text and sign as soon as possible, possibly by October, Afghanistan does not seem to be in a hurry. Kabul, it is believed, has emphasised that negotiations should not be calendar driven and instead should focus on the quality of the text.