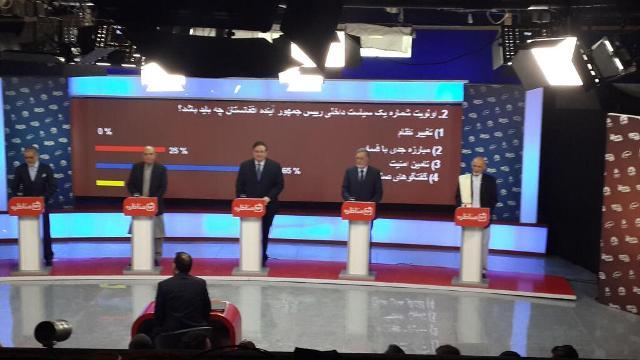 KABUL (Pajhwok): In a lively overnight debate, five of the 11 presidential runners supported signing of the Bilateral Security Agreement (BSA) with the United States and outlined their vision for a future political structure.

During the first TV debate since the beginning of the campaign, the candidates also discussing ways of combating widespread administrative corruption and promoting democracy, women’s rights and freedom of expression.

Security deal with US:

Rassoul, Ghani and Karzai supporting concluding the pact, but Abdullah and Wardak were not asked for their stance on the issue. However, Abdullah has previously backed the accord.

The BSA, part of strategic cooperation between Kabul and Washington, had been endorsed by a consultative Loya Jirga’s sovereignty, would strengthen peace, he believed.

For his part, Ghani opined signing the BSA would reinforce the country’s independence — a view shared by Qayyum Karzai, who said Afghan forces could not guarantee security on their own.

Four contenders favoured the current constitutional order, but Abdullah promised that he would introduce the parliamentary system if he won the vote.

Abdullah supported the parliamentary system because it involves active participation of political parties, people and elected members. A government thus elected remains accountable to the masses.

Other participants said the existing situation on the ground did not warrant any change in the system. The country was not in a stable position to cope with such a change, they argued.

The five men batting to succeed President Hamid Karzai had almost identical views on the peace process, calling some Taliban groups patriotic and willing to return to normal live. But those linked to Al-Qaeda promoted a foreign agenda and would be dealt with sternly.

They suggested talks with the fighters who were ready to lay down arms and cut ties with foreign terrorist outfits. Ghani slammed the killing of people. Corruption and injustice had forced many of the rebels into taking up arms, he noted.

Rassoul said war was not a solution to any issue, but in the same breath, he favoured the use of force against militants involved in bombing mosques, torching schools and killing Afghan security personnel.

But Ghani said peace could be achieved only when the government and the armed opposition showed flexibility and reached agreement on a system.

“Peace will come about if both sides discuss the real issues and show flexibility in their stance. Power sharing will not bring about peace,” he maintained.

Abdullah said Afghans desired peace, calling for war on opponents of peace, a reference to defiant Taliban. “Those who are out to topple the government and those who are using weapons against us are the enemies. Every group which is involved in killing of innocent people and is handled from outside the country is our enemy.”

Karzai believed corruption contributed to insecurity in Afghanistan and vowed to combat the scourge if he was elected.

Ghani said the war on corruption should be waged through judicial organs and there should be complete transparency in court proceedings.

Rassoul called graft a cancer — one of the major challenges facing the country. He said administrative graft was the legacy of a weak governance and non-enforcement of laws.

Wardak said administrative corruption had earned Afghanistan a bad name in the comity of nations. He added the issue must be tackled through building the capacity of judicial organs.

Abdullah stressed transparency in all actions and decisions, reforms and law implementation could overcome corruption.

The candidates also spoke about their future plans concerning women’s rights, their role in the government and facilities for them in every sphere of life.