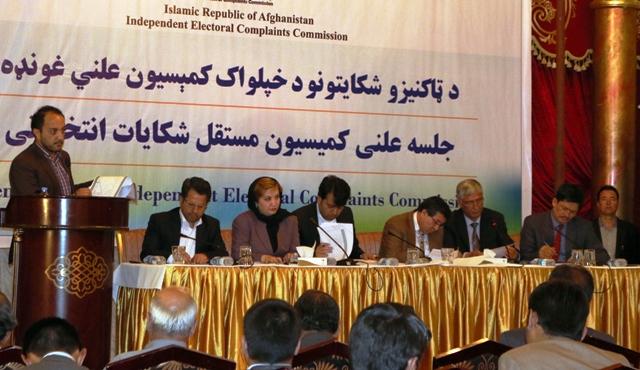 Most of the complaints were registered against leading presidential runners Dr Abdullah Abdullah and Dr Ashraf Ghani Ahmadzai.

Most of the complaints were about fraud, ballot stuffing by Independent Election Commission (IEC) workers and local officials in favour of Ghani and Abdullah.

Some complaints show that ink used in Balkh was different from what the commission had provided. But representatives of the two runners said most of the complaints were baseless.

Abdullah’s representative Zalgai Sajjad criticised said: “The complaints registered by our team have not been included in the public hearing and those against us were heard.”

Syed Habib Hashimi, a member of Ahmadzai’s team, rejected complaints against them as invalid and without evidence. He said such complaints were unacceptable to the team.

But IECC Chairman Abdul Sattar Sadat said they would investigate Abdullah’s claim and the provincial officers who did not take remedial measures in this regard would be punished.

IECC Secretary Nader Mohseni said the public hearing ended and a decision of votes from 36 suspected polling sites would be taken on Thursday.