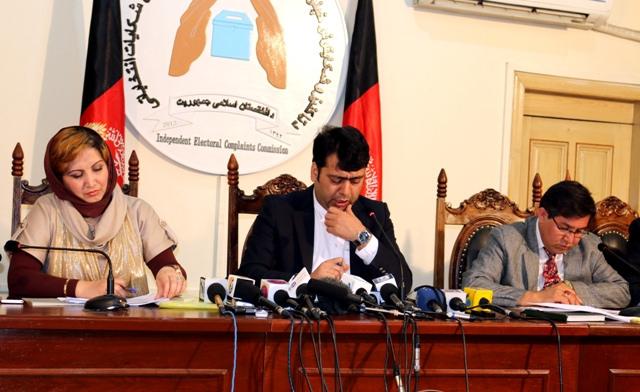 IECC Chairman Abdul Sattar Saadat told Pajhwok Afghan News the complaints concerning fraud and violations of law would be addressed in the presence of candidates’ representatives.

He said the objections had been divided into zones and currently complaints from the northwestern zone comprising Samangan, Balkh, Jawzjan, Sar-I-Pul and Faryab provinces were being addressed.

IECC Secretary Nader Mohseni told reporters the public hearing would continue for six days. In addition to candidates’ representatives, he said, other people could also oversee the process.

Complaints from Baghlan, Badakhshan and Kunduz provinces in the northeastern zone would be addressed tomorrow.

According to the IECC, complaints from Herat, Badghis, Nimroz, Farah and Helmand provinces are to be taken up for hearing next Tuesday and on Wednesday from Nangarhar, Laghman, Kunar, Nuristan, Paktika, Paktia and Khost.

Complaints from the central zone — Kabul, Kapisa, Parwan, Wardak, Logar, Panjsher, Bamyan, Ghazni and Daikundi — would be reviewed and addressed on Thursday.

For the last one week, hundreds of failed PC candidates in some provinces, including Kabul, have been protesting against the initial results, saying widespread fraud had been committed in the April 5 elections.

Of 2,600 individuals nominated for the provincial council, 458 of them declared successful.

The Independent Election Commission (IEC) announced preliminary results of PC candidates on May 20 and final results were set to be made public on June 7. But the final result could be delayed until June 12.