Above 100 killed in Election Day violence 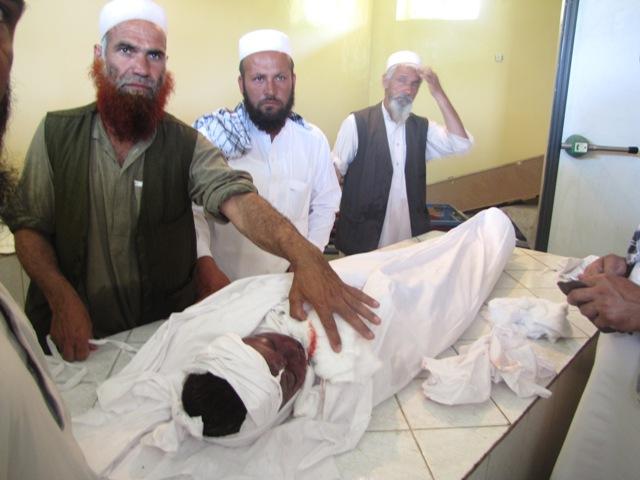 Above 100 killed in Election Day violence

KABUL (Pajhwok): More than 100 people died on Saturday when seven million Afghans braced gun, bomb and rocket attacks and voted to elect for five years their new president to succeed President Hamid Karzai, who is office over the past more than a decade.

Half a dozen ANA troops were injured, he said, claiming 60 insurgents were also killed. The death toll among the rebels was likely to climb, he said, but did not elaborate.

A tally by Pajhwok Afghan News puts the number of people killed on Saturday at 30, with 53 others injured in various provinces.

Six Taliban militants were killed and three others were wounded after police ambushed them in Shakai area of the Barki-i-Barak district in central Logar province, the district chief said.

Eng. Mohammad Rahim Amin said nine militants had gathered in the area planning to attack a polling centre but they were preempted by police.

Reports about incidents of violence started pouring in from various parts of eastern Kunar province soon after the voting began at 7am.

A rocket was slammed into Asadabad, the provincial capital, soon after the voting began. But Governor Shujaul Mulk Jalala said there were no casualties in the rocket fire.

There was a clash between local residents and Taliban militants in Mazar Dara area of Norgul district, leaving two civilians dead and as many injured, according to Kunar police chief Brig. Gen. Abdul Habib Syedkhel.

A police man and three voters sustained injuries when a bomb went off at the gate of a polling centre in Maimana, the capital of Faryab province.

Three people, including two women, were killed when a rocket allegedly fired by insurgents hit a house in the Ghormach district’s Maqur area. Another five people were injured in the incident.

Two Afghan Local Police (ALP) members on a motorcycle were patrolling in front of a polling centre in Baghlan-i-Markazi district when a bomb blast occurred, injuring both.

A bomb blast took place in front of Habibia High School at 7:40 in the limits of third police district of Kabul city. In the same area, a bomb hidden beneath a bridge went off but caused no casualties.

On the eastern outskirts, a clash erupted between supporters of two rival Wolesi Jirga Tarakhel in the Pul-i-Charkhi area, leaving two persons injured.

Three militants were killed in a blast caused by their own explosives, which they were transferring to Gardez, the provincial capital. Oryakhel said the three wanted to carry out bomb attacks on polling centres, but fell prey to their plot.

Nearly a dozen civilians were injured in a roadside bombing that occurred near a high school in Ahmadabad district. The victims were dancing in front of a polling centre when the blast occurred.

Five children were killed in a rocket attack blamed on the Taliban in Ali Sher district of southeastern Khost province. Another 17 people were injured in the incident that took place in Babrak Thanai area.

Four civilians — two children, a young girl and a woman — were killed in a rocket fire incident blamed on Taliban insurgents in the Qarghaee district.

A police officer was killed in a rocket attack in the Kharandab area of Jurm district and a voter was injured separately in the Yamgan district in a similar incident.

In this western province, three polling centres in Parchaman and Pashton Koh districts stayed shut due to security problems.

Seven suicide bombers entered a house in Kandahar City at 11am, firing rockets and throwing a hand grenade toward security forces after they besieged the house.

One policeman was injured in the incident and security forces continued to besiege the house.

Militants chopped off fingers of nearly a dozen individuals who voted in the election.

A Taliban spokesman Zabihullah Mujahid said the fighters carried out dozens of attacks in various parts of the country, killing and injuring a large number of security forces.