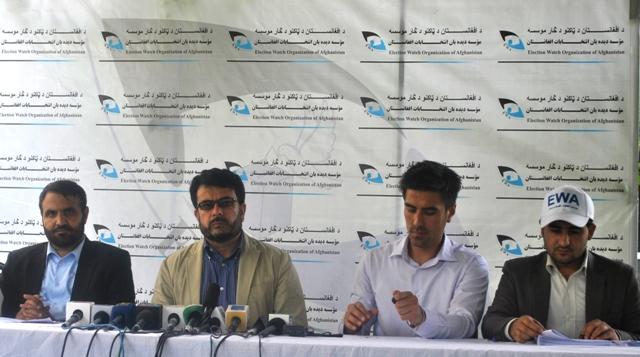 KABUL (EWA) on Monday said that its observers had recorded a number of fraud instances and called for the electoral bodies to properly investigate the claims.

A report released by the independent watchdog on Saturday’s runoff presidential election said at least 1,600 observers of the organisation monitored the process across the country.

The report said the June 14 ballot was generally held in a peaceful environment but the voter turnout had been less than the April 5 first round.

EWA Director Jan Dad Spinghar told journalists fraud instances were detected by observers in the second round. He urged the election commission to address the issue as soon as possible.

Another EWA official, Asadullah Farzan, said they had registered 461 instances of votes cast by ineligible individuals, 158 instances of proxy voting (by men for women), 80 of campaign on polling day and 21 of ballot stuffing.

But Spinghar said the electoral commissions should take steps to ensure transparency and answer candidates’ questions. The commissions should hold public hearings on ballot boxes from quarantined sites and allow observers and representatives of media and candidates to monitor the process.

“We ask both candidates to stay away from spreading prejudices and avoid creating a negative environment. Both should wait until formal results are made public by the commissions,” Spinghar noted.

Afghanistan Civil Society Forum (ACSF) said despite the insurgency, the massive participation of people in the June 14 election demonstrated legitimacy of the process.