Elections trigger crisis instead of clarity 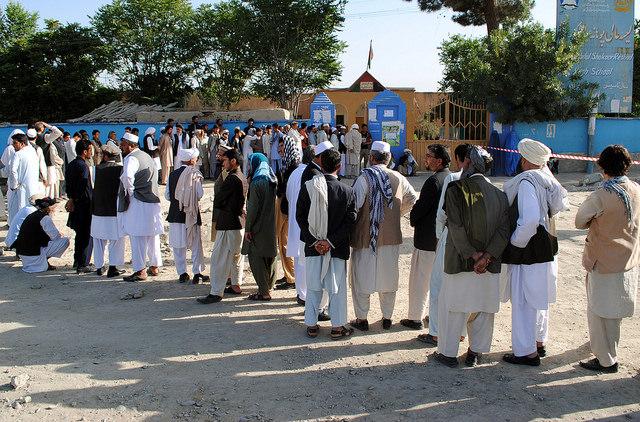 Elections trigger crisis instead of clarity

KABUL (Pajhwok): The prolonged electoral process has led to increased unemployment and deepening political and economic crises in the country.

Common people, the business community and others affected by the political tension remain concerned about the still-unclear situation.

The political tension subsided after the presidential hopefuls agreed to form a national unity government on Friday, thanks to US Secretary of State John Kerry.

The electoral crisis began after Dr. Abdullah accused his rival Ashraf Ghani Ahmadzai of widespread fraud in the June runoff. Abdullah also suspended cooperation with the electoral bodies and refused to accept the results.

A month after the polls, Kerry and UN’s top political representative in Afghanistan Jan Kubis brokered a deal between the two candidates.

The candidates agreed to recount and audit of all the votes cast, but the process that began July 17 had since faced several suspensions due to differences over the UN-proposed criterion for invalidation of suspected votes.

The vote audit had been scheduled to compete in three weeks, but could not because the election commission had to suspend it five times.

He said economic activities had been smooth before the elections, but the delays in announcing results worsened political and economic situations in the country.

Alokozai said corruption had further increased in a majority of government departments currently focused on the ongoing election process at a time when the parliament had risen for summer recess and other institutions had lost their executive power.

Roohullah Azizi, a property dealer in Kabul, said: “The political situation has badly affected economic activities, with people losing jobs and the ability to buy or sell properties due to the uncertainty.”

Moneychanger Najibullah Akhtari said investors were concerned about the situation and trade activities had declined by 80 percent.

He said foreign firms had promised investments in different sectors this year, but they were reluctant to fulfill their promises in the wake of the ongoing electoral crisis.

He said had the foreign investments done this year, the country’s economic situation would have been stable to some extent.

Shams said one percent decline had been noticed in investments during the first six months of the current fiscal year compared to the same period last year.

Abdul Qadir Jilani, a spokesman for the Ministry of Finance, said the total revenue this financial year was estimated at 70 billion afghanis, but the government had received only 57.1 billion so far.

Jilani said the election process had also affected exports and imports, making it difficult to achieve the targeted revenue.

Mohammad Ismail Rahimi, director general of policymaking for national development at the Ministry of Economy, said some foreign firms had suspended aid to Afghanistan until the bilateral security agreement (BSA) was signed with the United States.

The US has already linked future aid and military assistance to Afghanistan with the bilateral security agreement that would allow thousands of American troops to stay beyond this year.

Rahimi said the announcement of election result was the need of hour for Afghanistan and hoped the next government would be inaugurated sooner than later.

Three major international conferences on Afghanistan are scheduled to take place this year in which future assistance and peace in Afghanistan would be discussed.

The election crisis has also led to an increase in unemployment in the country. A 55-year-old man told Pajhwok Afghan News employment opportunities had disappeared and life was becoming difficult.

Mohammad Hassan, another daily wager, said: “Earlier, the situation was good, we could find work three to four days a week, but now it is very difficult to find work.”

He said the people of Afghanistan had been hoping that the situation would improve after the elections. “We never expected such a crisis to erupt,” he concluded.