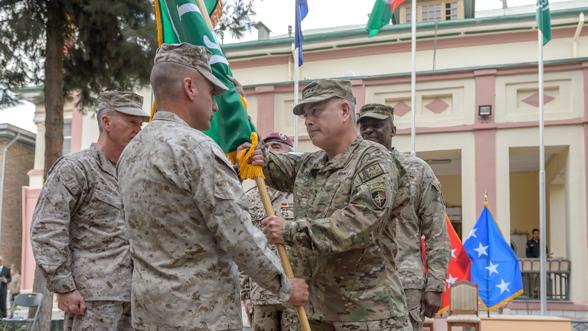 KABUL) changed hands at a well-attended ceremony in Kabul on Tuesday.

Gen. Martin Dempsey, the chairman of the Joint Chiefs of Staff, also attended the ceremony at a US military base here. About 44,000 troops from 48 countries, nearly 30,000 of them American, are part of the alliance.

Secretary of Defense Chuck Hagel acknowledged, meanwhile, expressing confidence in Campbell. ”John’s leadership comes at a defining moment, as Afghanistan undertakes a historic political transition, and the US and our coalition partners transition from combat to training and support for Afghan forces.”

In his message to the troops, Campbell said: “Today I assumed command of the ISAF and US Forces in Afghanistan. I am truly humbled by this profound responsibility. Up front, I want to recognize the enormous contribution of my predecessor General Joe Dunford…”

He hinted the change of command represented a change in personnel only, not a change in policy or strategy. He promised to seen civil-military efforts together with coalition, Afghan and diplomatic partners to determine where refinements may be needed.

But the phasing, timing and objectives of the NATO campaign would remain the same, he added. “Our main effort will remain supporting our Afghan partners to develop the credibility and long-term sustainability of the Afghan Security Institutions (ASI) and Afghan National Security Forces (ANSF).

“By strengthening their institutions and improving their organizational processes, we will cement the gains made to date, and ensure that Afghanistan never again becomes a safe haven for terrorism,” he maintained.

Meanwhile, the NATO Secretary-General Anders Fogh Rasmussen wished Gen. Campbell every success and said he was looking forward to working closely with him.

“General Campbell is taking up his post at an important time for Afghanistan and for our ISAF mission. The Afghan security forces are leading all security operations,” he said.

Rasmussen added by the end of the year, the Afghans would have full security responsibility to protect their population. “I am confident that Gen. Campbell will lead ISAF through an orderly completion at the end of this year and guide our efforts to continue to support the Afghan forces, once the required legal framework is in place.”