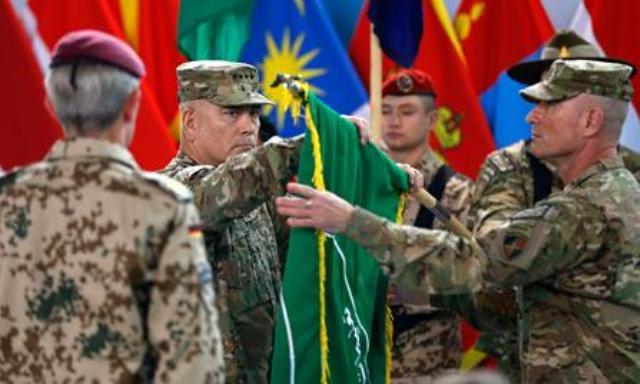 The event marked end to the NATO-led International Security Assistance Force (ISAF)’s 13-year-old war and the combat troops will be replaced by13,000 foreign troops to train and advise the nascent Afghan security forces from January 1, 2015.

The ceremony completes the gradual handover of responsibility to the 350,000-strong Afghan forces, who have been in the lead for nationwide security since the middle of last year.

Foreign troops part of the new mission post-2014 codenamed “Resolute Support” would come from 28 NATO allies and 14 other partner nations.

Analysts say insurgency remains a serious challenge for the Afghan government after the longest war.

In his Christmas Day address, US president Barack Obama said the US longest war would come to a responsible end in just a few days.

The United Nations says that civilian casualties hit a record high in 2014, jumping by 19 percent with 3,188 civilians killed by the end of November.

Afghan’s police and army have also suffered a grim death toll on the battlefield, with fatalities soaring to more than 4,600 in the first 10 months of 2014 — far higher than all ISAF deaths since 2001.

A Taliban spokesman said the US and NATO mission was a failure as evident from today’s ceremony, which was held in secret.

US and NATO commanders insist Afghan forces have the ability to combat insurgents and they had made great achievements so far.

However, US forces will continue to provide some air support for the Afghan military and may extend operations if required to prevent rapid Taliban advances.