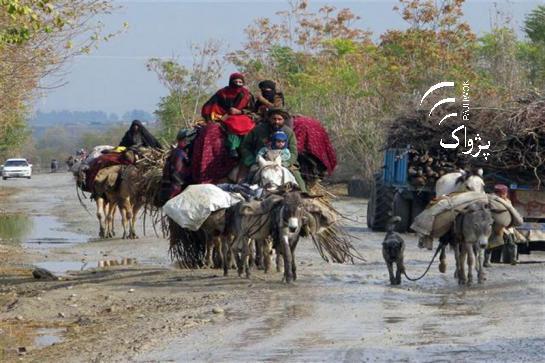 KUNDUZ CITY (Pajhwok): “I had two sons. One of them lost his life to an airstrike by foreign forces and the second has been suffering from paralysis, breaking my back,” sobs an anguished man from northern Kunduz province.

Abdul Karim, a shell-shocked dweller of Chahardara district, is still reeling from the loss of his son. The man frequently visits his child’s grave and weeps copiously there. But no amount of tears and pain can bring him back.

Nearly a hundred civilians were killed and dozens injured on September 4, 2009when NATO forces pounded a crowd of people, who were mistaken for militants in the Omarkhel area of Chahardara.

The massacre took place when civilians were extracting fuel from two ISAF tankers that had been hijacked by Taliban. The bodies of several individuals were charred beyond recognition. Many others were maimed.

Abdul Karim says his 23 years old son was killed and a 17 years old left paralysed. He told Pajhwok Afghan News he had spent a large amount of money on his son’s treatment inside the country and abroad. But the boy remains far from recovered.

Karim, a farmer from Issakhel village, is a broken man. With his eyes welling up, he asks: “What crime had my sons committed? They weren’t fetching fuel from the tankers; they were on the way to their sister’s home.”

The poor grower says the back of his son was burnt seriously and his entrails lay outside of his body on the ground after being hit by the bomb. “I took him twice to Pakistani hospitals two times in the past and once last month. He is currently under treatment in Pakistan and my relatives there are helping him.”

The 60 years old, working on his five acres land, also lost his vehicle and two tractors to the airstrike. His son-in-law, who had invited the boy to a Quran recitation ceremony, was also killed in the attack.

“Six years on, the families of victims including myself have received only $5,000 in compensation. We have been given no other aid. I am currently living together with my spouse, a 10 years old son and four daughters,” he continues.

His two sons, who helped the man with farming, were literally his right hand. But one pair of hands is gone forever, while the other is disabled. Feeding the family in itself has become a formidable challenge for ageing man.

“We are forgotten, having lost our nearest friends. NATO and the Afghan government should pay attention to alleviating our plight, because I cannot earn enough from farming,” Karim comments.

Ismail, a resident of Ahmadkhel village and a victim’s relative, reveals nine people were killed and several others injured in his neighbourhood. His 27 years old brother Ishaq was among those injured. His back and feet have been wounded.

“We took him two times to Pakistan for treatment, but he still could not walk. Ishaq’s back has partially healed but his feet still need medical care and an amount of money we cannot pay.” Ismail plans to seek a girl’s hand for his brother, who cannot stand on his feed.  He fears his brother would be not able to feed his family.

Each affected family received $5,000 in compensation from the regional human rights commission five years ago, he acknowledges and later the government provided them a bag of flour, two blankets, ghee and some other items.

A representative of the victims, Jamaluddin, explains the people collecting fuel were not the only target; nearby houses were also struck, killing children, shepherds. So many people were affected in the area.

After his sacking over the airstrike, an air force general sent $11,000 from his salary annually for two years after the tragedy. Food items purchased with the money were delivered to each affected household along with 1,800 afghanis in cash, he recalls.

Initially, the German government pledged $100,000 to each family, but the promise was honoured in breach, he laments. The hapless households sought permanently assistance and education for their children to keep them from becoming a burden on society.

Another representative, Karim Popal, says that the victims’ lawyer struggle for many years in Germany, but there has been no word regarding his legal battle for a year.

Popal, who pursued the case against the German government in 2011, says the victim had demanded $4.4 million in recompense. As a result of airstrike, most of the families lost bread-winners, he maintains.

Nearly all relatives of the victims have been suffer from metal disorders and no one has so far cured them. Popal represents 426 people from 79 families, who demanded $33,000 in compensation from Germany two years ago.

Media reports indicate lawyers for the victim families rejected the verdict of the primary court in Germany, They have warned if the court of appeal do not issue a favourable verdict, the case will be taken to European and other international courts.

The lawyers complain that the German court did not facilitate the presence of witnesses and victim families. The German judges did acknowledge the bombardment as a mistake, but did not accept compensation claims. A court in Bonn has already confirmed receiving 10 petitions for compensation.

Acting Governor Hamdullah Danishi says Karim Popal has been in contact with the victim families. He will update the authorities on the follow-up action.

The affected families have been assisted with food items and clothing by the International Security Assistance Force (ISAF) and the Afghan government. But such households deserve assistance in different spheres, he agrees.

The injured, facing economic constraints, have to be taken abroad for medical treatment to foreign countries, the acting governor adds.

Chardara district’s administrative head, Zalmai Farooqi who did not hold any office at that time, characterises the incident as a heavy loss for the people.

Some members of the families have become farmers and shepherds while the rest are thronging the district headquarters in quest of relief. Unfortunately, they have not receive a positive response as the officials have no facilities to offer them.

The district chief wants the government and the international community to deliver sustained aid to the victim families.

Mohammad Yousuf Ayubi, the provincial council chairman, says such tragic events are rarely forgotten with the passage of time. He did not have a formal job in the government at that time. Ayubi verifies most of the victims were civilians, suffering huge losses.

He asks the international community to provide meaningful assistance to the victims and help them return to a normal life on a priority basis.

Amruddin Wali, a provincial council member, opines the airstrike victims, caught in multiple problems, need help from the global fraternity. The council is supporting every countryman hit by war.

Kunduz inhabitants dub the Chardara airstrike one of the painful incidents in the country’s history. The international troops must think through the consequences of bombing civilians, they stress, voicing their deep-seated shock at the deadly raid that has got itched on their memory.

Mohammad Yasin, hailing from Kunduz City, urges foreign forces to make sure who were getting fuel from the hijacked tankers — the Taliban or civilians?

Siddiqullah, another resident, says short-term relief for the affected families is not enough. Assistance to the victims should continue over the longer haul, he demands.

The families losing their elders have been deprived of proper look-after and they should be provided meaningful assistance, including education, food, healthcare and housing.

He thinks a small amount of cash compensation could not relieve the pain and problems of victims, urging the NATO forces not to ignore the victim families.

The German defence ministry had promised providing each family an amount $5,000 in compensation after its case was processed. The German government eventually paid the victims.

German soldiers, in charge of the Provincial Reconstruction Team (PRT) in Kunduz, had reconstructed the damaged houses and buildings besides providing food items for the victim families.

According to the German defence minister, the Chardara raid was carried out by NATO aircraft in compliance with orders from a German military commander.

The Afghan government and the international community had strongly condemned the Kunduz airstrike. Kabul demanded an immediate halt to civilian killings by foreign troops, but repeated protests on this emotive issue do not seem to have produced the desired outcome.