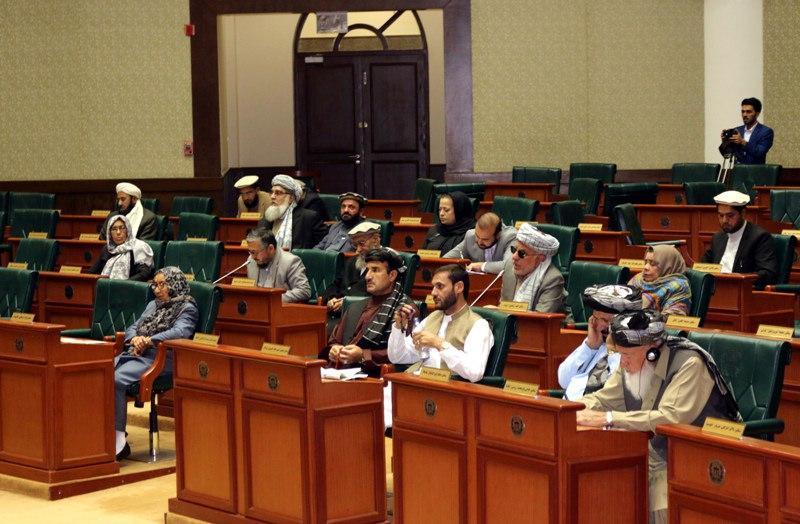 KABUL or upper house on Sunday decided to summon senior security and military officials next week.

Also today, the Wolesi Jirga or lower house of parliament held an extraordinary session and tasked a delegation with investigation into recent attacks in Kabul.

On Wednesday, nearly 90 people were killed and 460 others wounded in a truck suicide bombing in Wazir Akbar Khan diplomatic quarter of the capital.

On Friday, people took to the streets in Kabul and asked the government leaders to resign over their failure to protect people. But the protest later turned violent, leaving seven dead and 35 others, including 25 police, wounded.

On Saturday, seven people were killed and 119 others wounded in a suicide bombing and two subsequent explosions at funeral ceremony for Mohammad Salim Ezedyar, son of Meshrano Jirga’s Deputy Chairman Mohammad Alam Ezedyar, who was also among those killed in the protest.

Today, the Meshrano Jirga discussed these incidents, with senator Abdullah Qarlaq accusing Iran and Pakistan of involvement. Qarlaq said the government was also weak to prevent such incidents.

He assailed security officials, particularly Kabul garrison commander, Gul Nabi Ahmadzai, for failing to control the security situation. He called for Ahmadzai  to be summoned to the house.

Deputy chairman Faisal Naib, pointing to recent attacks, said, “Hands from inside the government are inciting people to create distance between the nation and the state.”

Senator Amina Afzal also criticized the performance of security organs and asked the government to show no mercy to the enemy and execute terrorist inmates.

“Yesterday’s attacks were planned for assassination of jihadi leaders, the government wanted to target mujahidden and that was the reason it did not take security measures for the funeral ceremony,” another senator, Malim Lala Gul, said, without going into details.

He said the Bilateral Security Agreement (BSA) with the US and NATO should be cancelled as the accords did not resolve Afghans’ problems but instead created further insecurity in the country.

The senators asked the organs concerned to identify the perpetrators of recent attacks and said top security officials should be summoned to the house.

Meshrano Jirga Chairman Fazal Hadi Muslimyar, who was slightly injured in Saturday’s funeral attack, demanded investigation into Wednesday’s incident and said: “It should be made clear whether the truck used in Wednesday’s attack belonged to Iran’s embassy or had the embassy support or not.”

About Saturday’s funeral assault, he said the enemy was trying to create differences among Afghan tribes. The people of Afghanistan should get united against such plots, he urged.

Pakistan in the past was alone to support militants in Afghanistan, but Iran and now Russia had also started backing insurgents here, Muslimyar said, adding the people should support the current government and both the people and the state should work for national interests.

The lower house discussed on Sunday important security issues of the country at an extraordinary session, which ended without any result.

A day earlier, the Wolesi Jirga decided to hold an extraordinary meeting scheduled about the recent incidents.

Most of the lawmakers in today’s meeting stressed a review of the BSA, developing national consensus and summoning interior minister and intelligence chief.

They also called for sacking of Kabul police chief and Kabul garrison commander and preparing a security strategy and identification of organizers of recent attacks.

The Wolesi Jirga also decided to task an impartial commission with investigating the attacks.

He said the Wolesi Jirga would task a delegation on Monday with investigating recent incidents.