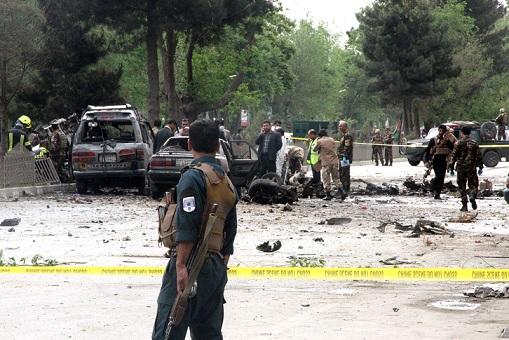 KABUL (Pajhwok): On average, 67 people were killed and injured daily in Afghanistan in the past 12 months, with one-fourth of the casualties happening in October and July this year.

Most of the casualties during the period happened in face-to-face clashes, airstrikes and suicide bombings.

Statistic reveal of every 14 casualties, eight occurred in face-to-face clashes, three in airstrikes, two in suicide blasts and one each in targeted and other types of assaults.

A recent Pajhwok report indicates of every 19 attacks, eight were face to face, four targeted, three each blasts and airstrikes and one suicide assault.

Taqat said due to collateral damage from airstrikes, more people suffered casualties and the harm was greater because the intended targets were missed at times.

The least attacks took place in Ghor, Maidan Wardak, Samangan, Badghis, Nuristan and Bamyan provinces in the past 12 months, but Pajhwok did not receive any report of violent attacks from Daikundi, and Panjshir provinces during this period.

Officials and experts also pointed out some other reasons behind the surge in fighting and activities of militant organisations.

About the drug mafia, Taliban and Daesh activities in Nangarhar, Gen. Taqat said such efforts were aimed to enable Daesh to find its way to Central Asia through Faryab province. .

Subsequently, he maintained, insecurity and instability had risen in northern provinces. However, he stopped short of saying who wanted to infiltrate Daesh into Central Asia.

In addition, an increase in the cultivation and smuggling of poppy, as well as a large number of heroin factories contributed to violence and insecurity.

Taqat said the interference of foreigners in bordering Farah province fueled insecurity in the province.

Regarding attacks in Kabul he said: “Kabul is politically important for militant groups; so they want to conduct attacks here and show the world that they are still strong and can strike the capital city.”

He said easy routes of supply lines to militants at the border provinces contributed to the growing attacks and incidents of insurgency.

About Faryab he said, its terrain was mountainous and covered with jungles and provided an easy platform for militants movement. Security forces had launched operation in Faryab against rebels.

Nuristan, Bamyan and Ghazni provinces are also mountainous but few attacks took place there in past 12 months.

Reports show 13,997 people were killed and 10,489 others injured in Afghanistan. On average 13 people suffered casualties in each attack in the mentioned period.

On average 67 people daily suffered casualties in the past 12 months.

Pajhwok monthly reports show July 2017 was deadliest in the past 12 months, but less deadly compared to October 2016.

Families of the victims ask the warring sides to end the conflict and instead work for peace and development in the country.

Norzia, a 13 years-old girl from Chaparhar district of Nangarhar province, who lost both her legs in a blast, demanded an end to the violence.

She said she was seriously disappointed by the non-stop violence that was daily claiming the lives of Afghans.

Mohammad Hottak, a resident of Ganahkan area of the capital of Farah province, said her cousin, Bismillah, who worked in the Farah revenue office, was killed by Taliban militants for working with the government.

He said Bismillah left behind six children. “His three years old son always asks about his father and his mother only responds by crying,” he said.

“Whenever I see the sorrow of this family, it is really intolerable, we ask the warring sides to stop fighting for the sake of God, stop making innocent women widows and children orphans,” he said.

Experts also say violence is not a solution. Political expert, Abdul Wahid Taqat, believed withdrawing foreign forces from Afghanistan would help end the ongoing conflict. “But they should continue supporting the Afghan forces”, he suggested.

Exiting foreign troops would leave the insurgents with no excuse to continue the war, he said.

However, another expert, Mohammad Younus Fakor, said: “The war in Afghanistan can be brought to an end with a right policy of the US and NATO countries that can pave the ground for peace and press Pakistani intelligence to stop supporting terrorism and accept peace,”

He said Afghan leaders and officials should get united and honestly find solution to the country’s problems.