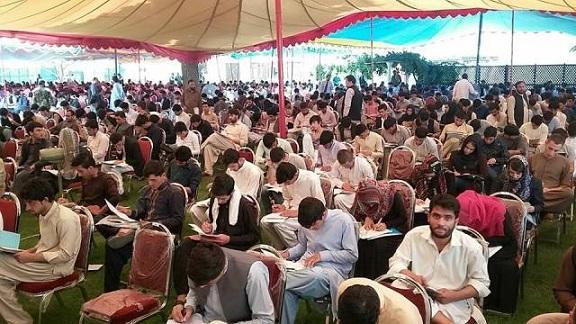 KABUL (MoHE) to take immediate steps to announce the long-delayed results of the exams for Pakistani scholarships.

In 2017, the Pakistan government announced 3,000 scholarships for Afghan students over the next five years. As many as 600 scholarships are allocated for each year.

About six months back, 8,000 students sat the exam in Kabul, Jalalabad, Kandahar and Mazar-i-Sharif. However, the results of the test have not been declared yet. There has been no progress in this regard.

Senator Nisar Ahmad Haris told Sunday’s session of the upper house the fate of thousands of Afghans was uncertain. “The test was conducted six months back, but the results are yet to be announced.”

The inordinate delay in announcing the results had caused grave concern among the youth as almost their entire academic year had been wasted, the lawmaker added.

He asked MoHE and Ministry of Foreign Affairs (MoFA) to formally share the issue with the Pakistani embassy. “If the scholarships are going to be further delayed, students should be provided higher education opportunities inside the country.”

Another senator, Jummadin Giyanwal, also voiced concern over the uncertain fate of thousands of students. He urged the government to share the problem with Pakistan through diplomatic channels.

He remarked Pakistan should not politicise the issue of scholarships. “There is no link between education and politics. The country should no more waste the time of Afghan students.”

Meshrano Jirga Chairman Fazal Hadi Muslimyar directed the education commission of the house to study the issue and share its findings with the upper house.

Jawad, who appeared in the scholarships exam, said his apprehensions grew with each passing day. “Our year has been wasted,” he told Pajhwok. His classmates, who attended universities within the country, have completed two semesters.

Mohammad Abid, another student, said after a long wait they did not want the scholarships. “If the scholarships are delayed further, the students should be formally asked to look alternatives.”

The Pakistani embassy in Kabul told Pajhwok the results would be announced by the end of January. But it said nothing why the scholarships have been delayed.