Only 7pc of Logar girls graduate from high school each year 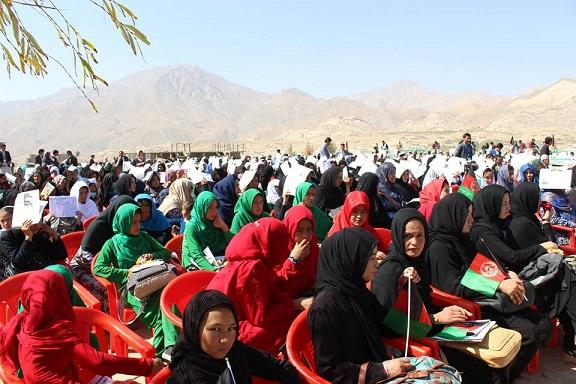 Only 7pc of Logar girls graduate from high school each year

PUL-I-ALAM (Pajhwok): Around 7,000 new girls are enrolled in schools in central Logar province each year, but only 400 of them reach high school due to cultural restrictions and insecurity, officials said Sunday.

Logar education director, Akbar Stanikzai, told Pajhwok Afghan News that girls in remote areas and even in the provincial capital, Pul-i-Alam, were still not allowed to get education.

“Traditions and security problems are two major obstacles to girls’ education in Logar province,” he said. “That is the reason most of families are not interested in sending their girls to school.”

“Many minor girls in the beginning of each year are enrolled in schools but most of them drop out after fifth grade,” Stanikzai added.

He said the Taliban in some areas threatened families against allowing their adult girls to continue education.

Despite these problems, 7,000 girls are enrolled each year in grade first in Logar but most of them study until grade six, he said.

However, Stanikzai said: “When these girls complete the grade six, their number in the next grade drops and only 400 girls graduate from high school each year.”

Currently around 7,000 girls are sixth grade alone in Logar. The education director said he had shared all problems plaguing girls’ education with relevant officials, who had promised to resolve them.

“We also started efforts in collaboration with tribal elders to resolve this problem”, Stanikzai added.

Shahla, a grade eighth student in Purk High School in Pul-i-Alam, said that she left the school this year due to some domestic problems.

“My father and uncles forced me to stop going to school, they told me that I am now a grown girl and I had learned enough in school to resolve my problems,” she said.

Sayed Javid, a tribal elder from Pangram area of Charkh district, said that girls generally studied up to grade six in their district.

“Our local culture does not allow us to let our adult girls and women learn outside home, it is considered a shame, but if a family tries to break this tradition, the Taliban would threaten them,” he said.

He said there were only primary schools in their district and secondary and high schools did not exist because girls were not allowed to get education beyond grade six.

On the other hand, Shima Zargar, provincial women’s affairs director, confirmed these problem and said girls were denied many rights in the province.

Citing an example, she said besides barring girls from education, they were not allowed to work in offices either.

“Old traditions are still practiced in our society, people respect their culture more than the law and Sharia, people see it a big shame when their girls attend school or work in offices,” she added.

“We also talked with Islamic scholars so they campaign against these bad traditions, it is a good way to deal with wrong cultures,” she said.

Mualvi Sayed Azam Alhashemi, a prominent Islamic scholar, told Pajhwok that it was obligatory for both men and women to get education according to Islam.

He said there were many Hadithes and Quranic verses that supported education for all.

“Education for all is mandatory in Islam, it means it is important than anything else,” he said.

Logar governor’s spokesman, Salim Saleh, said it was a reality that many families did not allow their girls to go to school due to bad customs.

“The government cannot be blamed because men deny their women their legitimate rights and do not leave their girls to get education,” he said.

The government has paved the ground for education for all people, now it was up to people to get education or no, Saleh said.

He said the government always encouraged families to let both boys and girls get education.