In Helmand, women candidates up against odds 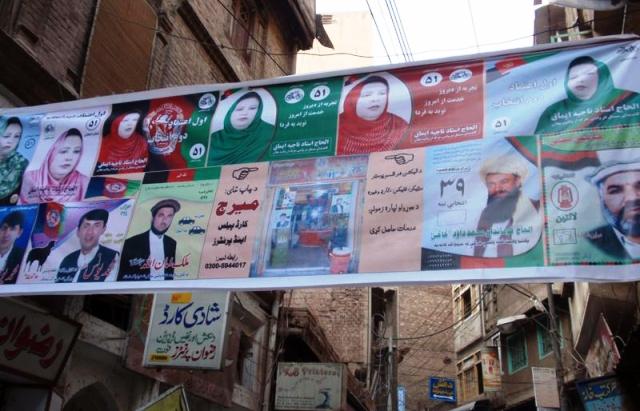 In Helmand, women candidates up against odds

LASHKARGAH (Pajhwok): Women from southern Helmand province grumble about cultural and security impediments to displaying their portraits and banners in crowded places of the city.

Helmand province has eight seats in the lower house of parliament, including two berths reserved for women. A total of 92 individuals, nine of them women, are in the electoral race from the restive province.

Jameela Niazi, a female candidate, told Pajhwok Afghan News complained they were unable to conduct their election campaigns the way their male counterparts were doing.

“Unlike men, we have limited financial resources and unable to travel to districts or the countryside in connection with our campaigns,” she alleged, seeking justice for all candidates.

“We face public criticism — culturally motivated — if we display our photographs as part of the campaign. This is a huge problem for us. In addition, such acts enhance security threats to us,” argued Niazi.

Unlike men, security for women was volatile, she claimed, saying men could hire bodyguards. Security institutions are also cooperating with male runners” she believed.

She opined people generally avoided voting for educated women because of primitive traditions. Instead they preferred promoting illiterate and conservative men, she insisted.

Husnia Ehsas, a women rights activist, acknowledged the problems and difficulties being faced by women during the ongoing electioneering.

“There is limited space for women, who could not interact with the public as easily as men dose. Women candidates also cannot openly share their photographs on social media,” she reasoned.

Ehsas asked the Independent Election Commission (IEC) to work on these issues and spread awareness among the masses regarding hurdles to women’s campaign.

Khuda-i-Noor Khanzada, a civil society activist, said some extremists viewed things in a negative way. But some hopefuls posted their banners and motto in a manner that is in clash with social norms and values.

“Just like Islam allows women to do business, it also permits them to have a role in the decision-making process,” the scholar maintained, while supporting females’ rights.

“Women are faced with cultural taboos on the one hand and grapple with security problems on the other. Police will pay more attention to resolving the issues,” he promised.

Women candidates in other provinces are faced with similar security and social issues.  As a result, they cannot effectively campaign for the elections, scheduled for October 20.