Armed attacks decline by 95pc in a week

Armed attacks decline by 95pc in a week

KABUL (Pajhwok): Armed attacks declined by 95 percent during the weeklong reduction in violence across the country, Pajhwok Afghan News have learnt.

The reduction in violence period begana week ago as a result of an understanding between American and Taliban negotiators in Qatar.

The US and the Taliban are all set to ink a long-awaited peace deal in Doha today. The deal will eventually lead to intra-Afghan talks and a ceasefire in the country.

Vice-president elect Amrullah Saleh told reporters militants carried out 70 to 80 attacks daily before the start of RiV week — an initiative aimed to reduce violence by 80 percent.

The violence fell more than their expectations, he said, adding Afghan and foreign forces monitored the RiV and shared the related issues with Taliban’s political office in Qatar.

Pajhwok reports show 70-80 people were killed or wounded on a daily basis, But during the week, the numberscame down to 25 killed and 33 wounded daily. 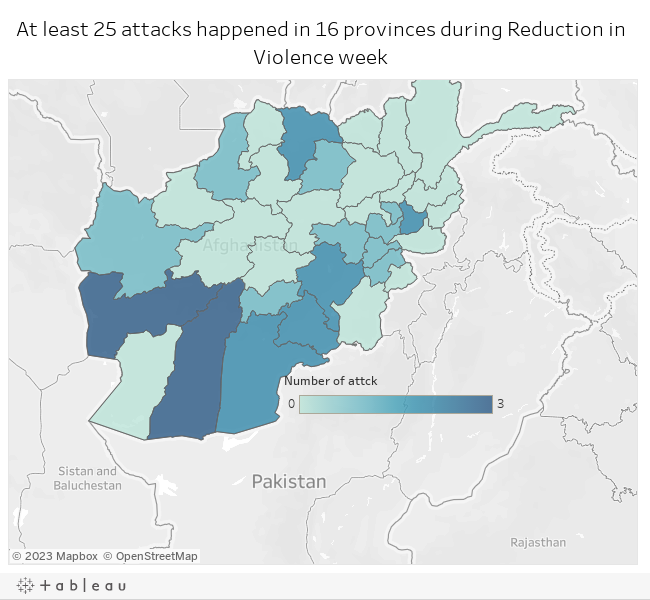 During the week, two attacks took place in Balkh, one each in the Zazai Aryub district of Paktia, Chinartu district of Uruzgan, Andkhoi of Faryab, Maroof district of Kandahar and Shah Walikot of the same province.

Three attacks occurred in Helmand, one in Samangan and three in Farah. A bridge was blown up in Maidan Wardak, two guards were kidnapped and two attacks happened in Zabul and one in Ghazni.

Two attacks happened in Laghman, one in Herat and one in Kapisa.No group claimed responsibility for these attacks.

Mujahidin attacks must not be considered a violation, he said, explaining two assaults happened on the first day of the RiV week. But militants were not involved.

Separately, a former Hezb-i-Islami Afghanistan commander was killed and his bodyguard injured in an armed attack.