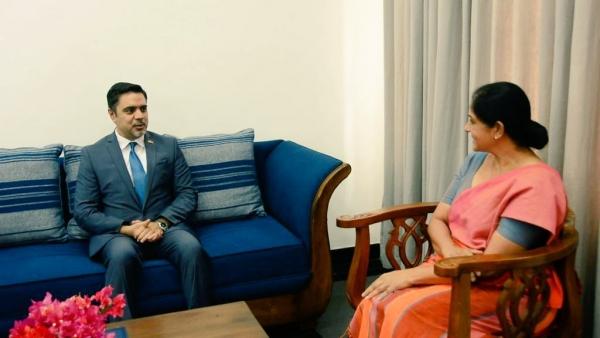 The Afghan embassy in Colombo in a statement said the two sides welcomed the commitment of the two countries’ top leadership to further expanding bilateral ties to encompass new areas of cooperation, including establishing sister-city and sister-province partnerships between Afghanistan and Sri Lanka with a shared heritage and many converging interests in the regional and global contexts.

As part of his recent provincial visit, Ambassador Haidari congratulated the governor on her recent appointment as the first female governor of one Sri Lanka’s key provinces.

Governor Yahampath discussed the core industries of the Eastern Province, including construction, fishing, agriculture, and tourism, and noted that in each of these areas, Afghanistan and Sri Lanka could explore opportunities for cooperation through public and private sectors.

Haideri said “there is much business demand and interest in each of these areas in Afghanistan where our construction sector needs skilled labor, while our tourism industry would immediately take off in the post-peace era when Sri Lanka’s tourism investors in hotel management and hospitality could find in Afghanistan a highly profitable market to invest in.”

In this regard, Governor Yahampath appreciated the Ambassador’s efforts to connect Afghan and Sri Lankan businesses, following their discussion of the recently signed cooperation MOU between the Ceylon Chamber of Commerce (CCC) and the Afghanistan Chamber of Commerce and Investment (ACCI).

To build on this fruitful conversation, Ambassador Haidari met with the board members of the Chamber of Commerce and Industries of the Trincomalee District (CCITD), discussing with them numerous investment opportunities in Afghanistan.

They also discussed both sides’ key export products such as Afghanistan’s fresh fruits, dried nuts, carpets and drugs, precious and semi-precious stones and gems, as well as Sri Lanka’s tea, coconut-based products, textiles, food and beverage, among others.

He praised the Governor’s own role in helping empower the women of Sri Lanka, and encouraged cooperation between women-led businesses and civil society organizations of Afghanistan and Sri Lanka.

Finally, both sides discussed opportunities for sister-city and sister-province ties to be initiated by signing of MOUs, which should facilitate Afghanistan-Sri Lanka ties at the municipal and provincial levels.

Following exchanging mementos, Ambassador Haidari and Governor Yahampath took a few questions from the press on issues, which they discussed in their meeting and the way forward.

The Ambassador greatly appreciated the Governor’s warm hospitality, and told the press he was looking forward to working with the Governor to further deepen Afghanistan-Sri Lanka ties.