9,592 troops from 36 countries serving in Afghanistan 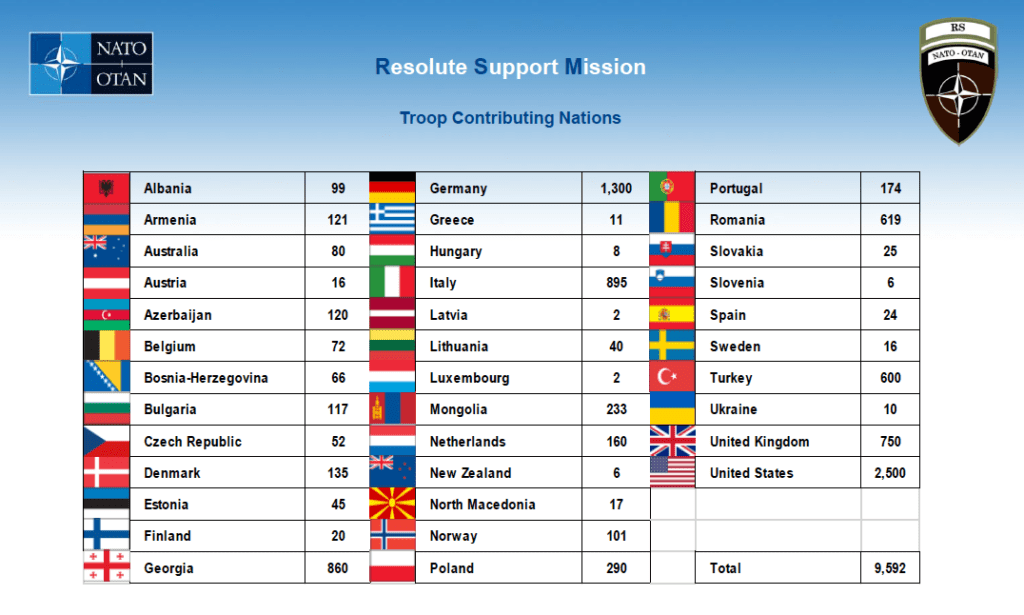 9,592 troops from 36 countries serving in Afghanistan

KABUL (Pajhwok): In line with US President Joe Biden’s announcement, all American troops will depart from Afghanistan by September later this year, coinciding with the 20th anniversary of the Sept. 11, 2001 terrorist attacks in the US.

Deployment of foreign troops began in Afghanistan on Oct. 7, 2001, when the US together with the UK launched Operation Enduring Freedom.

They were joined by some 43 NATO allies and partners after the UN-authorized International Security Assistance Force (ISAF) on Dec. 20, 2001.

At its peak, there were an estimated 130,000 foreign troops in Afghanistan. This mission was declared completed on Dec. 28, 2014, with the size of foreign troops drastically reduced and combat operations by all members almost entirely ended, except for the US.

Currently, under the NATO-led Resolute Support Mission, there are a total of 9,592 troops from 36 nations stationed in the war-ravaged country, with the US topping the list with 2,500 soldiers.

Georgia is in fourth place with 860 soldiers, the UK in fifth with 750 soldiers, Romania in sixth with 619 soldiers, and Turkey with 600 soldiers in seventh place.

Poland, Mongolia, Portugal, Netherlands, Norway, Denmark, Armenia, Azerbaijan, Bulgaria, and Denmark are among NATO Allies and Partners with at least over 100 soldiers as part of the Resolute Support Mission in Afghanistan.

In January this year, the Turkish army took the lead of NATO’s Very High Readiness Joint Task Force placing thousands of soldiers on standby, ready to deploy within days. Units from Albania, Hungary, Italy, Latvia, Montenegro, Poland, Romania, Slovakia, Spain, the UK, and the US will also serve on the force, which is part of the alliance’s larger NATO Response Force.

Turkey’s Brig. Gen. SelcukYurtsizoglu heads the Train, Advise, Assist Command (TAAC) that conducts functionally-based security force assistance to the 111th Capital Division in the Afghan capital Kabul. Albania, Azerbaijan, the Czech Republic, the Republic of North Macedonia, Turkey, and the US are the contributing nations.

The US’ Col. Scott T. Yeatman heads the crucial TAAC-Air. Its mission is to train, advise, and assist Afghan partners to develop a professional, capable, and sustainable air force in Afghanistan. Among the contributing nations are Australia, Croatia, Czech Republic, Denmark, Germany, Greece, Hungary, Romania, Slovakia, Sweden, Turkey, the UK, and the US.

The US also heads the TAAC-East in the Laghman province and the TAAC-South in Kandahar province. Meanwhile, Italy’s Brig. Gen. Alberto Vezzoli heads the TAAC-West in the Herat province bordering Iran.