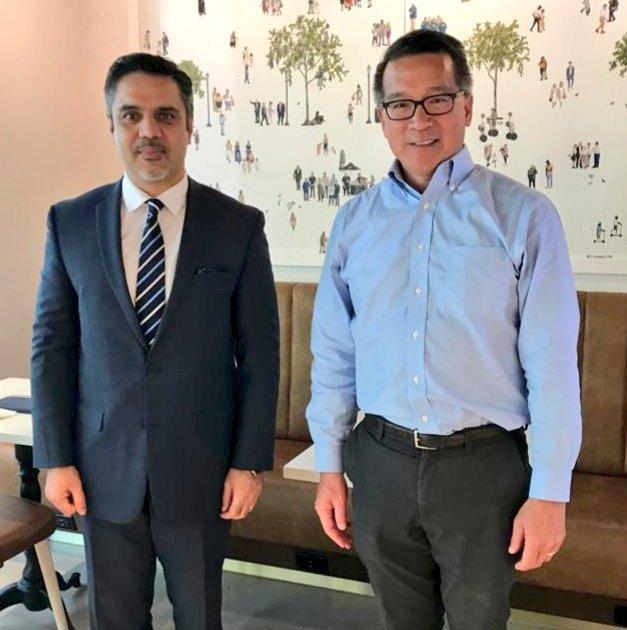 After talks with Afghan and Sri Lankan leader on the environmental programmes, projects and partnerships of SACEP, Haidari met Alan Yu in Washington-DC.

This followed the envoy’s April visit to South Asia, where he met Indian and Bangladeshi leaders on increasing climate ambition ahead of the US Summit on Climate in late April and the 26th Conference of Parties (COP26) to the UN Framework Convention on Climate Change in November.

COP26 intends to help secure global net-zero by mid-century and keep 1.5 degrees within reach, according to a press release.

To achieve this goal, South Asia as one of the most climate-vulnerable regions figures high on the global climate agenda both for mitigation and adaptation purposes.

Haidari had a productive discussion with Yu, exploring opportunities for cooperation with the Office of the US Special Presidential Envoy for Climate as a newly established mechanism, helping to promote global climate partnerships, especially with vulnerable regions.

He spoke in detail on SACEP and its mission goals to Yu, including its recent undertaking of implementing a major World Bank and Parley for the Oceans project: Plastic Free Rivers and Seas for South Asia (PLEASE).

He pointed to the X-Press Pearl disaster in May, causing unspeakable damage to marine life and coastal environment in Sri Lanka, calling for international recovery assistance to the country.

Haidari also discussed with Yu his meetings with the president, vice president, foreign minister, finance minister and director-general of the National Environmental Protection Agency of Afghanistan (NEPA), given the country’s status as the world’s most vulnerable to the adverse effects of climate change.

In the Afghan context, he cited the direct connection between climate change and national security, highlighting recent climate-induced droughts and flash floods that displaced for a third time residents of eight provinces of Afghanistan.

With little or no humanitarian aid, climate-displaced jobless youth were easy recruits for terrorists, he said. Both sides agreed this needed special attention from the US and global aid community.

Yu referred to the core goals of the Office of the Special Presidential Envoy for Climate and the programmes associated with the key objectives of the envoy, including raising global climate ambition.

On climate aid and implementation, he explained other US agencies, including USAID, encouraged SACEP to seek tangible cooperation with them.

He also noted America’s contributions to multilateral financing institutions such as the World Bank, encouraging greater cooperation between SACEP and those institutions to support the former’s regional initiatives.

In this regard, he welcomed the implementation by SACEP of the PLEASE project with the support of World Bank.

Haidari thanked Kerry, Yu and their team for the enhancement of global attention to one of the key challenges confronting humanity.

He reaffirmed SACEP’s commitment to doing its part in working with member-states to coordinate regional and global efforts for mitigating and adapting to climate change in the South Asia region.