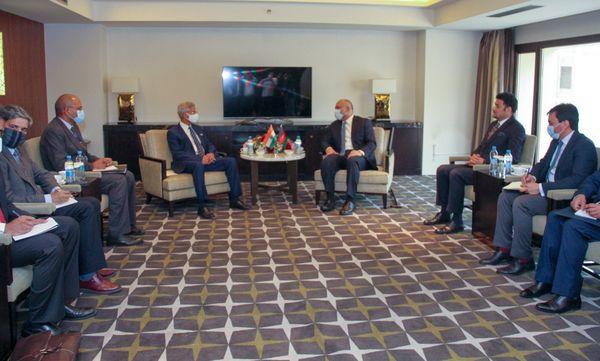 KABUL (Pajhwok): Minister of Foreign Affairs Haneef Atmar and his Indian counterpart Subrahmanyam Jaishankar have exchanged views on the Afghan peace process and the joint fight against terrorism.

The top diplomats met on the sidelines of the fourth meeting of the Afghanistan Contact Group within the framework of Shanghai Cooperation Organisation (SCO) in Dushanbe on Tuesday.

India’s cooperation on bringing lasting peace and stability in Afghanistan, as well as the political and security situation also came up for discussion, the Ministry of Foreign Affairs said.

Atmar elaborated on the political and security environment in Afghanistan, the outcome of President Ashraf Ghani’s visit to Washington and continued support for Afghanistan from the United States.

About the escalation of Taliban attacks in collusion with foreign fighters and terrorist networks against civilians and the Afghan armed forces, he said overcoming the common threat was of vital importance to regional security.

Atmar underscored India’s constructive role in strengthening regional consensus on the Afghan peace process and the preservation of the achievements of the last two decades.

Voicing concern at the rising violence and stressing the need to end the bloodshed in Afghanistan, Jaishankar assured Atmar of India’s continued cooperation on strengthening regional and global consensus on achieving a political settlement in Afghanistan.

The external affairs minister, at a separate meeting with his Uzbek counterpart Abdulaziz Kamilov, discussed the situation in Afghanistan.

Jaishankar tweeted: “Began my Dushanbe visit by meeting with Afghan FM @MHaneefAtmar. Appreciate his update on recent developments. Looking forward to the meeting of the SCO Contact Group on Afghanistan tomorrow.”