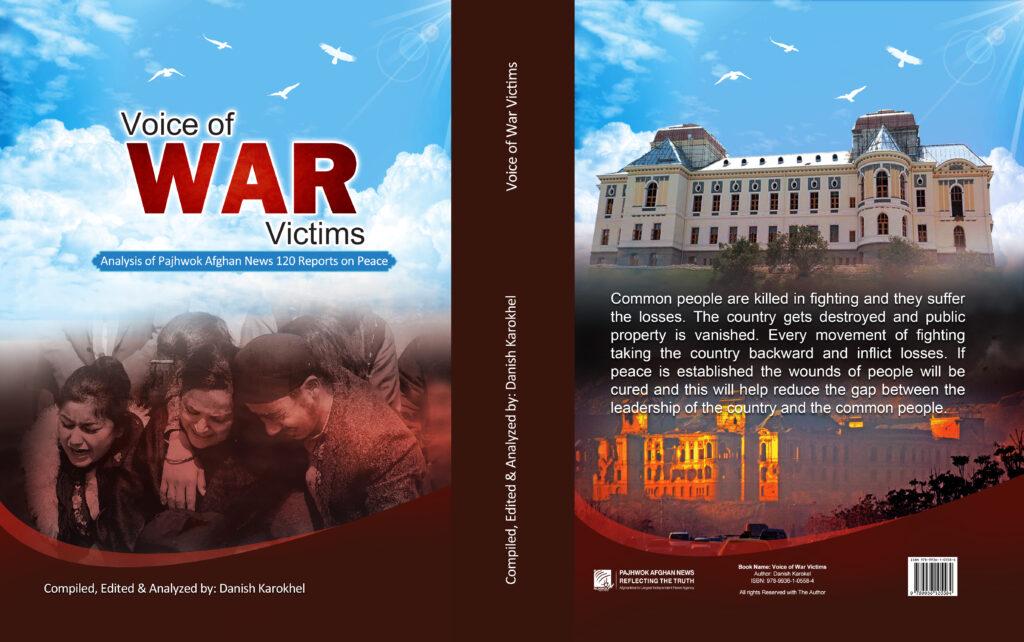 The book is compiled from Pajhwok’s several feature reports on peace and war victims in recent years, these stories are heart touching and surely force tears from the eyes to drop. Pashto and Dari version of the book has already been published

In recent years, Pajhwok Afghan News has been able to raise and share the voices of war victims in Afghanistan with the masses. It has produced a string of detailed reports about the losses the victims endured during the war. These reports help you get the real picture of the war and feel the suffering and pain of the people. These reports also help you realise the anguish of the war-affected Afghans from each region and ethnic group.

Putting together these reports in a single collection is undertaken for two reasons:

First, supporting and strengthening voices of the conflict-hit individuals, families and communities that have suffered as a result of attacks from the warring sides.

Second, conveying relevant information and voices of war victims to the Afghan government, armed groups, civil society and the international community. The objective is to ensure justice for the affected communities and prevent war tavages in the long run.

The reports in this collection have been posted to Pajhwok’s website and the special peace website, as well on Pajhwok’s social media pages.

Uniqueness of these reports:

Some of these Pajhwok reports have heart-wrenching content. While editing and analysing these reports, I could not fight back tears. I felt like someone from my own family had suffered this pain and suffering.

The reason for this feeling could be that I, too, lost my father and six other family members in 1984-when I was only eight years old.

In my 45 years life, I have encountered so many serious problems over the last 25 years. I myself have been producing reports and sharing stories with others about the suffering of my compatriots due to the conflict imposed on Afghanistan.

I have compiled, edited and analysed Pajhwok reports on the peace process for this book in order to assess the performance of my team and detect shortcomings therein. Additionally, I would like to urge warmongers to choose a better path — the path of peace.

This book has been compiled to inform the parties involved, who are instrumental in bringing war or peace to Afghanistan, about the misery of the war-weary people.

This book is expected to help boost awareness on the warring sides about the predicament of war victims, including women and children. Hopefully, it will prove effective in strengthening mechanisms for the protection of war affected people.

Comprised of 120 Pajhwok reports about war victims in Afghanistan, this book seeks to enable readers to clearly understand the circumstance and intensity of the ominous thing called war.

I recommend government officials, donors, leaders of political parties, combatants and others read these reports to understand the issues being faced by the people, develop effective programmes for steering them out of this miserable situation and provide them necessary support.

I also request readers to provide constructive feedback to enrich this edition of the book and bring necessary changes to the next edition.

In the end, I want to acknowledge sincere efforts by all Pajhwok reporters and editors, who worked hard to produce these reports. My special thanks go to Abdul QadirMunsif, data journalism and peace unit editor, and MohamadNaseerMalikzai for collaboration on the review and editing of the book’s content.

I pray for peace prevailing in our country and arrival of the days when I will begin penning reports on the development of my country and people instead of dreadful war reports.

I am looking forward to sharing those joyous reports with you all.

Pajhwok, in addition to covering breaking from across the country, also prepares investigative and analytical reports on political, economic and social issues. This agency, which has emerged as a credible information source, offers news, feature, audio, and video and photo services.

Pajhwok began collecting information and filing investigative reports on the peace process in 2015. People have since become united on the urgency for bringing peace and stability to the country and preventing further bloodshed.

Pajhwok has dedicated a webpage to carrying information and reports about different aspects of peace. This page contains a variety of interviews, articles, and the Islamic view of peace, public suggestions, poems, statements, messages, resolutions, proposals, voice clips, videos, photos, caricature and books on this important topic.

Similarly, 65 of the Pajhwok reporters, based in the capital and provinces, have filed special reports on conflict management. We have reports from all 34 provinces of the country based on people’s perceptions of and demand for peace.

Importantly, Pajhwok has trained 23 people on peace journalism, reporting on elections and mines. Peace journalism, a news aspect of journalism in Afghanistan, is in the best interest of a happy and peaceful life for the people.

This news agency has been trying to do follow-up reports on civilian casualties. Interviews with victims’ relatives are included in such reports to give them an emotional angle. This helps the Afghans make up their mind for peace.

Pajhwok also releases comparative reports from secure and insecure areas, so that people could see the difference between peace and war. In this way, the Afghans are encouraged to contribute to efforts for reconciliation and stability.

Our sisters and mothers, who are the worst-hit by the war, are keener on peace than others. Pajhwok has focused on interviewing women from rural areas and those who are members of civil society, because their voices are real and come from the core of their heart. Such voices strengthen peace building initiatives.

Pajhwok has also conducted surveys on the peace process. It and shared the results — including public views and demands — with Afghan and international stakeholders.

Fact-cheking major news stories and sharing conclusions with people and officials is a key job for the media. The main objective behind fact-checking reports is to ensure justice and development in society and enabling people to live in peace and security.

To dig out the truth, this news agency minutely fact-checks rumours, false promises and derogatory statements attributed to certain individuals. The objective is to avoid possible harm to the peace process.

Pajhwok Afghan News published analytical reports in the areas of politics, economics and society besides current affairs and hot news reports over the past 18 years. It started collecting information on peace in 2015, so that people could join hands for peace to ensure national unity, uphold the values of this nation and end the current bloodshed.

In recent years, Pajhwok has successfully conveyed the voices of war victims to members of the general public, government officials and the wider international community.

The real picture of war, public demands and people’ sufferings have been highlighted in these reports. This has helped people feel the pain of different ethnic communities, which have gone through difficulties in different parts of the country.

The purpose of these stories is that negotiating team members should at least read and understand the situation of war victims, who have been sidelined and whose voices have gone unheard.

Over the past five years, Pajhwok has published 120 reports in three languages from the 34 provinces of the country, based on peace journalism standards. These reports reflected the voices of victims of the past 43 years of war. One may find heartbreaking stories in these reports. By reading about the victims’ pains one may understand better what their demands are. If their demands are heard and met, the country could pull out of the existing crisis.

This assessment report is about 120 peace stories published from January 20, 2016 to July 6, 2021. This assessment is conducted to promote a multi-dimensional peace, highlight the voices of war victims and convey their pains and problems to the participants of meetings in Doha and Istanbul.