KABUL (Pajhwok): At least 361 civilians were killed and wounded in violent incidents last week, while most of the country’s provinces fell to the Taliban and now only Kabul, Panjsher and Nuristan are under government control. 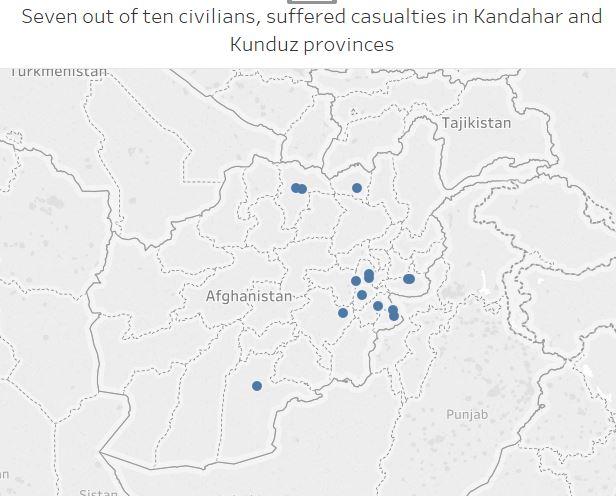 According to Pajhwok Afghan News weekly report, about 617 civilians were suffered causalities the week before last week, but the number dropped to 361 (65 dead and 296 wounded) last week.

According to analysts, the number of civilian casualties last week was low because some provinces fell to the Taliban without fight and some captured after a short battle.

International reactions on gaining the power by force:

The United Nations has called for an end to Taliban attacks on provinces and for an immediate solution to Afghan crisis.

Regarding the Taliban attacks, the United States said if the Taliban wants international legitimacy, attacks were not the way to go and the US did not accept a government formed by force.

US President Joe Biden said if the group threaten the American people in Afghanistan or the US mission there, they would respond quickly.

According to reports, a group of the mentioned forces reached Kabul on Sunday.

NATO also said that if the Taliban gain power by force, the international community would not recognize it.

There are rumors in Kabul that the Taliban had entered parts of the city and it made people worried that a conflict would take place.

However, the Taliban said in a statement: “The Mujahidden of the Islamic Emirate do not intend to enter the City (Kabul) by force or fighting, but to negotiate with other side to enter Kabul peacefully, we are working to ensure the transfer process is completed in a safe and secure manner, without comprising anyone’s life, property or honor.”

Discussion on peaceful transfer of power:

Last week, Pakistan Prime Minister Imran Khan said the Taliban would not talk until Ghani was in power.

According to reports, deputy head of Taliban Qatar office Sher Mohammad Abbas Stanikzai said in January that they were ready to work with a new government if Ashraf Ghani leave the power.