KABUL (Pajhwok): Efforts for the establishment of an inclusive government underway last week with peace all over the country but the airport attacks in which 192 people were killed and injured marked the week as deadliest.

Fifty-nine civilians were killed and 133 others injured in two blasts close to HKIA in capital Kabul on Thursday. The victims are those Afghans who rushed towards the airport for eavacuation purpose. 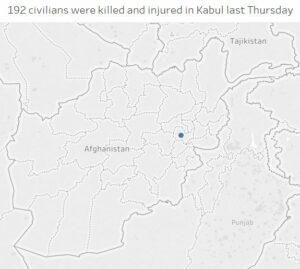 According to reports 13 US and two British forces were killed in the attacks and 17 others foreign soldiers were injured. Twenty-eight Taliban were also killed in the blasts.

Some media outlets reported that Daesh also known as the Islamic State of Khorasan (IS-K) claimed responsibility for the attacks.

The previous week 23 civilians were killed and 24 others injured in Maidan Wardak airstrike, Nangarhar rally, and aireal firing in the HKIA in Kabul.

On August 15, nearly 6,000 US forces and some other NATO nations troops have arrived in Kabul to help evacuate their citizens and some Afghans who worked with foreigners.

US Defence Department says nearly 110,000 people have been evacuated so far and the process will continue till August 31. Meanwhile, some western countries have announced completion of their evacuation process at HKIA.

The Taliban Spokesperson and the Cultural Commission Head Zabihullah Mujahid said foreign forces have left some parts of the Kabul airport and their personnel had been deployed but still the have no control over the entire airport.

Inclusive government should be formed soon

The residents of Balkh province in a gathering demanded the establishment of an inclusive acting government to address deteriorated public economic and social situation.

The Jamiat-e-Islah Soceity called on the Taliban to announce an acting government in order to address public problems. Some people are worried that why the government has not been announced so far.

Zabihullah Mujahid said talks with political leaders underway and an acting government would be soon formed.

Former Chairman HCNR discussed the establishment of an inclusive government with Turkish and German foreign ministers.

Qatar special representative for Afghanistan, Iranian ambassador for Aghanistan and Chinese special respresentative have met the Taliban leaders in Kabul.

They alsomet Chairman Abdullah, former president Karzai and other politicans.

Russian president telephoned Pakistani prime minister and stressed over the formation of an inclusive government in Afghanistan.

Some countreis offered to conditionally recognize the Taliban government stressing that Taliban should show compliance to women rights and form an inclusive government.

Some countries are soft in their stance while some are strict.

The World Bank has stopped funding to its projects in Afghanistan, the US has freezed Afghanistan currency support fund and stressed strict condition should be imposed on Taliban for seeking political recognition.

The International Monetary Fund (IMF) halt funding to Afghanistan, Germany said if Taliban impose Sharia Law as the country law it will not support them, European Union said they did not recongnise the Taliban officially, NATO says they will recognize new Afghanistan government when it remaine committed to intrantioanl commitment, G7 nations said its relations with the Taliban will be judge on the Taliban policies and practice.

British, however, said they decided to deal with the Taliban and chalked a mechanism in coordination with their allies.

The United Nations said they will remain in Afghanistan for the cause of human rights and establishment of peace. China said international community should provide support to Afghanistan instead of pressurizing them, Russia, however said the Taliban were in-charge of Afghanistan and there was no alternative to the Taliban.

German Chancellor Angla Merkal said Berlin was ready to talk to the Taliban to ensure the protection of the past 20 years of achivments, adding that Germany will not reached agreement with Taliban unconditionally.

According to experts, Russia and China were interested in recognizing the new Afghanistan government and the US has taken difficult stance in this regard because Washington wanted an inclusive government.

The Taliban Senior Member Ameer Khan Mutaqi said US policy of pressurizing Afghans economically and encouraging other nations to do so was a moral crime.

Mutaqi said the Islamic Emirate wanted cordial and positive ties with international community and they should get full advantage of the opportunity and refrain from policies that harm Afghanistan and its people.