KABUL (Pajhwok): Last week, the graph of civilian casualties caused by the now ended conflict dropped to zero, but eight people were killed in targeted attacks while the announcement of the Taliban cabinet drew mix reactions from different corners.

The past 40-year conflict finally comes to an end after the Taliban captured Panjshir province. Last week may be marked as the only week in past decades in which no civilian was killed or injured in violent incident.

It is worth mentioning that last week National Resistance Front (NRF) Spokesperson Fahim Dashti and one of NRF commander were killed in Panjshir with different stories leading to their killing. The Taliban claimed the resistance internal clash led to the killing of these commanders while some claimed the two were killed in Pakistani jets strike. 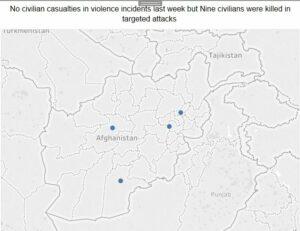 According to reports, the previous week, 13 people were killed in US forces airstrikes, but US claimed they targeted Daesh-Khorasan during the strikes.

In addition, celebratory firing over the capture of Panjshir province killed two people and injured 10 others in Kabul, in Nangarhar, 14 people were injured. The Taliban leadership strongly condemned the celebratory firing and ordered its fighters not to repeat similar action in the future.

The Taliban on September 7 announced the new cabinet naming Mohammad Hassan Akhund as the prime minister, Abdul GhaniBeradar and Abdul Salaam Hanafi his deputies. The Taliban said acting officials would be hired to remaining ministries and independent institutions.

The Taliban say domestic investments would be properly administered, international investors would be provided facilities and the new government would be held responsible in terms of Islamic rights and human rights and the world would cooperate with Afghanistan.

US and Turkey after the announcement of the acting cabinet said they were monitoring the situation, but US expressed concern over some cabinet members and added they understood the Taliban situation over the announcement of new cabinet. Turkey, however, said creation of an inclusive cabinet was vital for government in Afghanistan and that Ankara was in no hurry to recognize the Taliban government.

The US said it has reservations over some acting officials’ names and there was no woman in the cabinet list.

The EU has criticized the new caretaker government and says it could not represent all ethnic groups of Afghanistan.

The UN said that there were no women in the caretaker cabinet while stability in Afghanistan depended on inclusion of women and youths.

Pakistani foreign ministry said that it was closely following the evolving situation in Afghanistan and ‘the new caretaker political formation would create a governance framework for the Afghan people.’

Uzbekistani foreign ministerwelcomed the newly formed caretaker government in Afghanistan and hoped it would be a beginning of national unity in the country.

Iran national security council says that some Afghans were worried that the new government was not inclusive and some ethnic groups were responded with military might instead of negotiations.

China, on the other hand, said that it was a needed step for the Taliban to announce the new government to fill the governance vacuum and bring order and pave way for reconstruction in Afghanistan.

According to reports, German foreign ministry expressed concern over the Taliban’s caretaker cabinet and said that there was nothing for optimism. However, the country supported its diplomatic presence in Afghanistan and said it would reopen its embassy in Kabul but on the condition of good security and governance in the future.

Japan said that it would monitor the Taliban’s performance and would continue its efforts on the regard with the US and other countries.

Qatar said that Taliban’s new administration was based on consultations and they should be judged based on their performance.

Jamiat-i-Islami Afghanistan (JIA) criticized the new caretaker cabinet of the Taliban and said that they would not stay silent about the issue and would soon make a decision about the future government.

Former president, Hamid Karzai termed the announcement of the caretaker cabinet as important but said that shortcomings in the cabinet should be solved so all the people were represented.

GulbuddinHekmatyar, head of Hizb-i-Islami Afghanistan (HIA) also termed the announcement of new government as important and supported recent developments in the country. The party said that they would support any move for good and was ready to assist the new administration.

He voiced on all Afghans to support ‘these positive’ changes and give the new administration a chance’.

A number of culturists and civil society activists from Balkh province asked for formation of an inclusive government. A number of women during a rally in the province said that their rights and role should be secured in the new administration.

A number of women in Kabul expressed concern over the removal of women’s affairs ministry and asked the international community to interfere in the matter. However, some others were happy about the announcement of cabinet and hoped that it would help resolve the current problems in the country.

A number of women during a rally in Kunduz province supported formation of an Islamic government in Afghanistan.