Last week, 26 people were killed and three others injured in Afghanistan and the figures do not include casualties caused by natural disasters and traffic accidents.

In Kabul City, a security personnel was injured in a blast and police claimed to have killed three robbers while two unidentified bodies were recovered in Khak-i-Jabbar district.

One kidnapper was killed in the Bagram district of Parwan province but the victim’s family said he was innocent.

Last week an Explosive Remnant of War (ERW) killed two children in the Jalrez district of MaidanWardak province. One person was mysteriously killed in Ghor. In Samangan unknown gunmen killed a man while a body was also found in Aibak, the provincial capital. 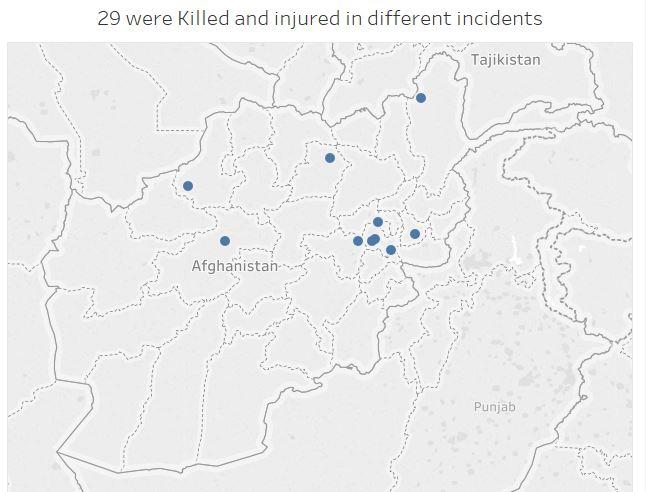 The previous week, five people were killed and 68 others injured in different incidents of violence in Afghanistan.

This comes as, before last year’s regime change, hundreds of people would get killed and injured in Afghanistan every week.

According to reports, UNOCHA announced additional 7.2 million humanitarian aid by Sweden to Afghanistan.

Last week, the World Bank said if the Afghan government wants the economy of Afghanistan will not collapse because the country has rich natural resources and there is nationwide security.

US, India and Iran last week once again emphasized on establishment of an inclusive government in Afghanistan.

This comes as the caretaker government of Afghanistan has repeatedly said that the government was inclusive.

Over 50 members of the French parliament in a letter to the country’s president sought sanctions on the Afghan caretaker government officials for ‘violation’ of human and women’s rights.

The US has expressed concern over the human rights situation in Afghanistan, claiming that the new government has created a humanitarian crisis in Afghanistan.

However, Afghan officials rejected the allegations as baseless and said that all legitimate human rights were guaranteed in Afghanistan and that concerns in the regard were baseless.

The United Nations High Commissioner for Refugees (UNHCR) has also expressed concern over the situation of Afghan women and said that Afghans, particularly women and girls, face many challenges.

However, the Afghan government says that it gives all the rights of women and girls under Sharia law.

New academic year in Afghanistan started on March 23, but the government postponed the opening of girls’ schools above the sixth grade, saying the schools would be reopened once a plan was completed.

The government’s move to delay schools’ opening faced with reactions.

UNHCR last week said that it expects girls and boys to be provided with equal access to education so it would help secure a stable peace in Afghanistan’s future.

The US State Department also said that if the caretaker government of Afghanistan did not reverse its decision on girls’ secondary education, it would lead to serious consequences for the US and the international community.

However, Mullah Abdul Ghani Baradar, first deputy chief minister, during his visit to Farah province on Friday, hoped that girls’ schools beyond the sixth grade may reopen.

A general of the previous government, Sayed Sami Sadat, has said that he would start mobilization of former security forces for resistance, but officials of the caretaker government said that the issue did not worth a government’s reaction.