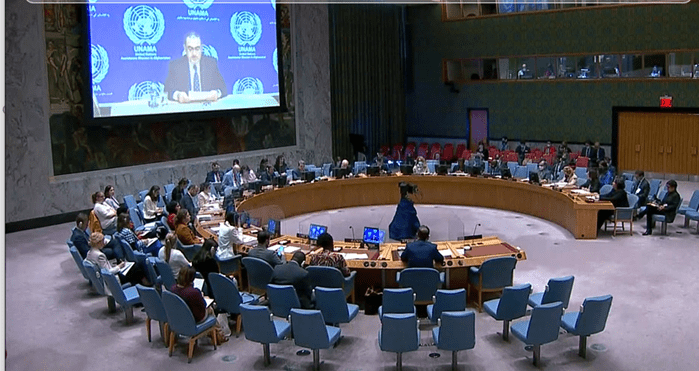 ATLANTA (Pajhwok): Acting Secretary-General’s Special Representative for Afghanistan, Ramiz Alakbarov during his briefing to the UN Security Council has drew a decaying picture of Afghanistan’s security, political, economic condition accompanied by recent earthquake that sparked havoc in southeastern part of the country.

He said Nearly 800 people have been confirmed killed and more than one thousand four hundred injured, many of them seriously, with several thousand homes destroyed and damaged.

Search and rescue operations remain ongoing, and it is expected that the number of casualties will further increase over the coming days, along with the number of affected communities. In the aftermath of the tremor, humanitarian actors mobilized an immediate response alongside counterparts from the de facto authorities, where the Ministry of Defense is in the lead, dispatching ambulances, medical equipment, trauma kits, medicine, mobile health teams and emergency supplies including tents, blankets, plastic sheeting and food assistance.

The human rights situation in Afghanistan remains precarious. Despite the adoption of a general amnesty and repeated assurances by the de facto authorities that it is being respected, UNAMA continues to receive credible allegations of killings, ill-treatment and other violations targeting individuals associated with the former Government of Afghanistan.

The de facto authorities have increasingly restricted the exercise of basic human rights, such as freedom of peaceful assembly, freedom of opinion and expression, quelling dissent and restricting civic space in the country.

These restrictions continue to be aimed particularly at the rights and freedoms of Afghan women and girls, limiting their involvement in social, political and economic life. These include most prominently the ban on secondary schooling for girls and the decision to impose face covering on women, on which you have been briefed in detail by former Special Representative of the Secretary-General Deborah Lyons. The cost to the economy of these policies is immense.

The psychosocial costs of being denied education, for example, are incalculable. Women are collectively being written out of the society in a way that is unique in the world.

Let me assure this Council that UNAMA will remain a vocal and visible voice for safeguarding the rights of the people of Afghanistan, especially those of women and girls.

The second issue I want to address is the ongoing economic crisis. This is perhaps the single most important issue in Afghanistan, as a potential driver of conflict as well as a driver of misery.

The Afghan economy has contracted an estimated 30 – 40 per cent since August; output and incomes have reduced by 20-30 per cent, while there has been a 50 per cent decline in the number of households receiving remittances.

It is possible that unemployment could reach 40 per cent this year – up from 13 per cent in 2021 – and some projections indicate that poverty rates may climb as high as 97 per cent by the end of 2022.

Even more alarming, 82 per cent of households are now in debt, while the deteriorating economy offers few chances to climb out of debt. Coping resources that helped many families get through last winter’s difficulties and humanitarian emergency are now being depleted.

If the economy is not able to recover and grow meaningfully and sustainably, then the Afghan people will face repeated humanitarian crises; potentially spurring mass migration and making conditions ripe for radicalization and renewed armed conflict.

At the same time, Afghanistan remains highly vulnerable to future climate change and geopolitical shocks. This comes on top of the extreme poverty and backwardness of Afghanistan’s rural areas, where productivity is low, and education and health services are often non-existent.

Let me be very clear, these problems are at the root of all socio-economic and political dilemmas Afghanistan has faced in the past and is facing now. This needs to be addressed if different social and economic outcomes are to be achieved in Afghanistan at any given time.

Currently, Afghanistan is experiencing its second drought in successive years, while other emerging threats – such as floods and disease outbreaks, as well as locusts and livestock diseases (impacting agrarian communities and households) – not to mention natural disasters such as the recent earthquake – are deepening and aggravating pre-existing vulnerabilities.

No matter what we do, Afghan rural areas must be given priority attention with the focus on agricultural-food systems to prevent cycles of hunger. We must help drive a grass-roots economic recovery which is anchored in the creation of value chains and developing linkages between farmers and food producers and local markets.

This, in turn, will help reduce child labour, improve health outcomes, and create an enabling environment for social development and change. It will also pave the way for substitution agriculture to replace the poppy cultivation, allowing us to capitalize on the de facto authority’s recent ban on poppy and narcotic cultivation. While doing so we need to continue to provide adequate attention to clearance of widely unexploded ordnance of war. This bottom-up approach to economic recovery is shared by the de facto authorities and would help the most vulnerable.

Already, the UN Country Team is implementing such approaches in rural areas through an area-based approach that channels technical and financial support directly to local communities and small enterprises, restores local small infrastructure, and provides basic income support for some of the most vulnerable in the society. However, funding for these types of economic recovery activities is minimal so far. We need your support.

When I and other members of the UN senior leadership team travel around the country and meet with vulnerable affected communities, the conversations leave a lasting impression. Let me share some.

Afghan families are humbled and grateful for the lifeline provided by the humanitarian response, however during this latest episode of what has been a forty year-long crisis, all have three straightforward, simple and sincere requests:

Achieving these, even in the current operational environment, should be within our reach.

With the generous support of donors, the humanitarian community has coordinated a response of unprecedented proportions to Afghanistan’s massive humanitarian crisis.

Between January and the end of April 2022, humanitarian partners reached 20 million people with at least one form of humanitarian assistance, including 19.3 million vulnerable people with humanitarian needs, 247,000 cross-border returnees, 75,000 refugees and 95,000 people affected by floods and other weather-related events.

Despite these achievements, the humanitarian crisis persists and will require sustained support over the course of 2022 and 2023. You will receive a more detailed briefing on humanitarian needs from Mr. Martin Griffiths later this morning.

Despite of the difficulties I have described, we firmly continue to believe that a strategy of continued engagement and dialogue remains the only way forward for the sake of the Afghan people, as well as for regional and international security.

Let me welcome here the appointment by the United Nations Secretary-General of Ambassador Markus Potzel of Germany as the new Deputy Special Representative of the Secretary-General for Political Affairs who will be responsible for leading the political engagement strategy.

A few elements here that are important to know; the Taliban continue to hold power almost exclusively.

The emergence and persistence of an armed opposition is in large part due to political exclusion. The overall security environment is becoming increasingly unpredictable.

Armed opposition attacks against de facto authorities doubled in May compared to April. The number of ISIL-KP attacks has generally decreased compared to same period last year, but their geographic scope has widened to 11 provinces as compared to six previously. We cannot exclude the possibility of increased instability if peoples’ rights are denied and if they do not see themselves in their government.

Our strategy in the month ahead seeks to promote political consultation and inclusion in a longer term. In the meantime, we are engaging with the de facto authorities to increase predictability in our relationship.

Even as the international community and the Taliban remain far apart on the question of human, women’s, and political rights, there are some areas where we can better cooperate to improve the lives of Afghans as well as advance on issues of common concern such as counter-narcotics and mine action.

Establishing an agenda of common interests will help build confidence and reduce misunderstandings. This includes types of assistance that directly support basic human needs, while moving where possible beyond pure humanitarian delivery into sustaining livelihoods for ordinary Afghans according to basic human needs as described above.

The challenges ahead are significant and will require more patience. But we must endure. It is the least that the Afghan people deserve. We continue to believe it is the only way forward for their benefit and the benefit of the international community.