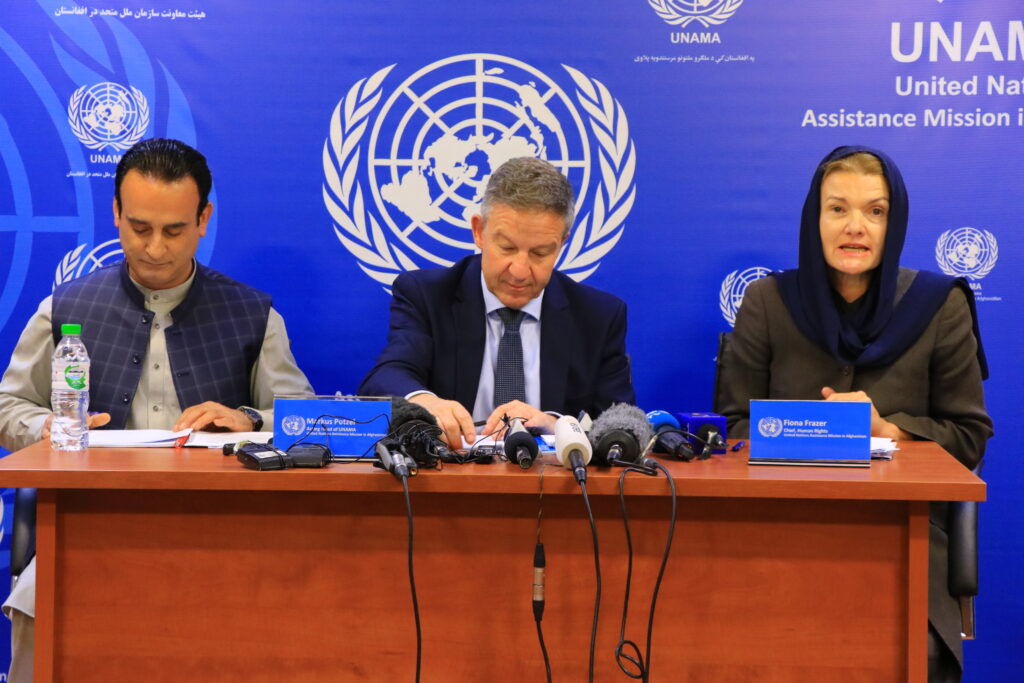 KABUL (Pajhwok): The United Nations Assistance Mission in Afghanistan (UNAMA) released on Wednesday a report on the human rights situation in the country since the ‘Islamic Emirate’ takeover 10 months ago, but the government official rejected the report and termed it propaganda.

On his Twitter handle Mujhaid wrote: “UNAMA report regarding human rights situation is not real. No extra-judicial killing is permitted in the country, if someone is found guilty of such incident that person would be labeled a criminal and dealt with according to Sharia Law. UNAMA report in this regard is baseless and propaganda”

The report sums up the findings of the UN mission with regard to the protection of civilians, extrajudicial killings, torture and ill-treatment, arbitrary arrests and detentions.

It also shines a light on the rights of women and girls in Afghanistan, fundamental freedoms and the situation in places of detention.

Most of civilian casualties were attributed to targeted attacks by the armed group self-identified “Islamic State in Iraq and the Levant – Khorasan Province” against ethnic and religious minority communities in places where they go to school, worship and go about their daily lives.
The UN secretary-general’s acting special representative for Afghanistan said: “It is beyond time for all Afghans to be able to live in peace and rebuild their lives after 20 years of armed conflict.

“Our monitoring reveals that despite the improved security situation since 15 August, the people of Afghanistan, in particular women and girls, are deprived of the full enjoyment of their human rights,” added Markus Potzel.

The mission acknowledged the Taliban administration had taken some steps for the protection and promotion of human rights.

In this regard, the report cited the amnesty for former government officials and security force members, the December 3 decree on women’s rights and a code of conduct relating to prisoners.

At the same time, the report held the new Afghan rulers responsible for a broad range of human rights violations in the country.

Since August 15, it alleged, the rights of women and girls had been progressively curtailed, including their rights to fully participate in education, the workplace and other aspects of public and daily life.

In many cases, UNAMA said, these rights were completely taken away. “The decision not to allow girls to return to secondary school means that a generation of girls will not complete their full 12 years of basic education.”

Simultaneously, it alleged, access to justice for victims of gender-based violence had been limited by the dissolution of dedicated reporting pathways, justice mechanisms and shelters.

UNAMA recorded at least 160 extrajudicial killings of former government and security officials by members of the de facto authorities over the past 10 months.

The government was urged to probe human rights violations, hold perpetrators accountable and prevent such incidents from reoccurring in the future.

UNAMA expressed concerns with respect to two bodies within authorities – the Ministry of Propagation of Virtue and Prevention of Vice and the General Directorate of Intelligence.

Many of the directives issued by the ministry curbed the human rights and freedoms of Afghans, in particular women and girls, the report claimed.

Intelligence operatives were accused of being involved in perpetrating human rights violations against individuals in their custody, including extrajudicial killings, torture and ill-treatment, as well as arbitrary arrests and detentions.

In the 10 months since they took control of Afghanistan, the de facto authorities have made clear their position on the rights to freedom of peaceful assembly, freedom of expression and freedom of opinion. They have limited dissent by cracking down on protests and curbing media freedoms, including by arbitrarily arresting journalists, protestors and civil society activists and issuing restrictions on media outlets.

“The rights to freedom of peaceful assembly, freedom of expression and freedom of opinion are not only fundamental freedoms, they are necessary for the development and progression of a nation. They allow meaningful debate to flourish, also benefiting those who govern by allowing them to better understand the issues and problems facing the population,” said Fiona Frazer, UNAMA Chief of Human Rights.

With regards to places of detention: encouragingly, the de facto authorities do appear to be seeking to fulfil their obligations in relation to the treatment of detainees, with the Taliban leader having issued guidance on this issue in January 2022. Progress is hindered by financial constraints, resulting at times, in inadequate food, medical care and hygiene supplies for detainees and the cessation of vocational education and training programs for prisoners that were previously funded by the international community.

This is compounded by detainees remaining in extended pre-trial detention in some cases, due to the functioning of the justice system.

The human rights situation has been exacerbated by a nationwide economic, financial and humanitarian crisis of unprecedented scale.

At least 59% of the population is now in need of humanitarian assistance – an increase of 6 million people compared with the beginning of 2021.

The report called on the international community to continue its support for the people of Afghanistan by ensuring that urgent humanitarian and basic needs were met.

The global fraternity was reminded of its obligation to ensure that sanctions, while they remain in place, do not have a negative impact on human rights.

Over the reporting period, UNAMA documented:

160 extrajudicial killings, 178 arbitrary arrests and detentions, 23 instances of incommunicado detention and 56 instances of torture and ill-treatment of former ANDSF and government officials carried out by the de facto authorities.

59 extrajudicial killings, 22 arbitrary arrests and detentions and 7 incidents of torture and ill-treatment by the de facto authorities of individuals accused of affiliation with self-identified “Islamic State in Iraq and the Levant – Khorasan Province”.

18 extrajudicial killings, 54 instances of torture and ill-treatment and 113 instances of arbitrary arrest and detention and 23 cases of incommunicado detention of individuals accused of affiliation with self-identified “National Resistance Front”.

217 instances of cruel, inhuman and degrading punishments carried out by the de facto authorities since 15 August 2021

Human rights violations affecting 173 journalists and media workers, 163 of which were attributed to the de facto authorities. Among these were 122 instances of arbitrary arrest and detention, 58 instances of ill-treatment, 33 instances of threats and intimidation and 12 instances of incommunicado detention.[1] Six journalists were also killed during the period (five by self-identified Islamic State in Iraq and the Levant – Khorasan Province, one by unknown perpetrators).

Human rights violations affecting 65 human rights defenders, 64 of which were attributed to the de facto authorities.

Among these were 47 arbitrary arrests, 17 cases of incommunicado detention, 10 cases of ill-treatment and 17 cases of threats and intimidation.