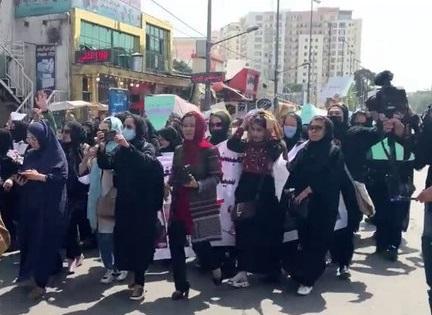 KABUL (Pajhwok): Security forces fired into the air to disperse a women’s protest demonstration in central capital Kabul on Saturday.

A number of women participated in the short-lived protest, chanting “bread, work and freedom”. But security personnel stopped them from continuing their protest.

The protest was held in the Sadarat square in Kabul near the Ministry of Education.

Videos of the protest are circulating in social media. In the videos, the protesting women can be seen chanting “bread, work and freedom” and “We women are awake and we are tired of discrimination.”

In the videos, it is seen that the security personnel are firing into the air to disperse the protestors

Government sources have not yet said anything about the protest.

Previously women had protested in Kabul as well. Government officials have repeatedly said that they are committed to women’s Islamic rights.