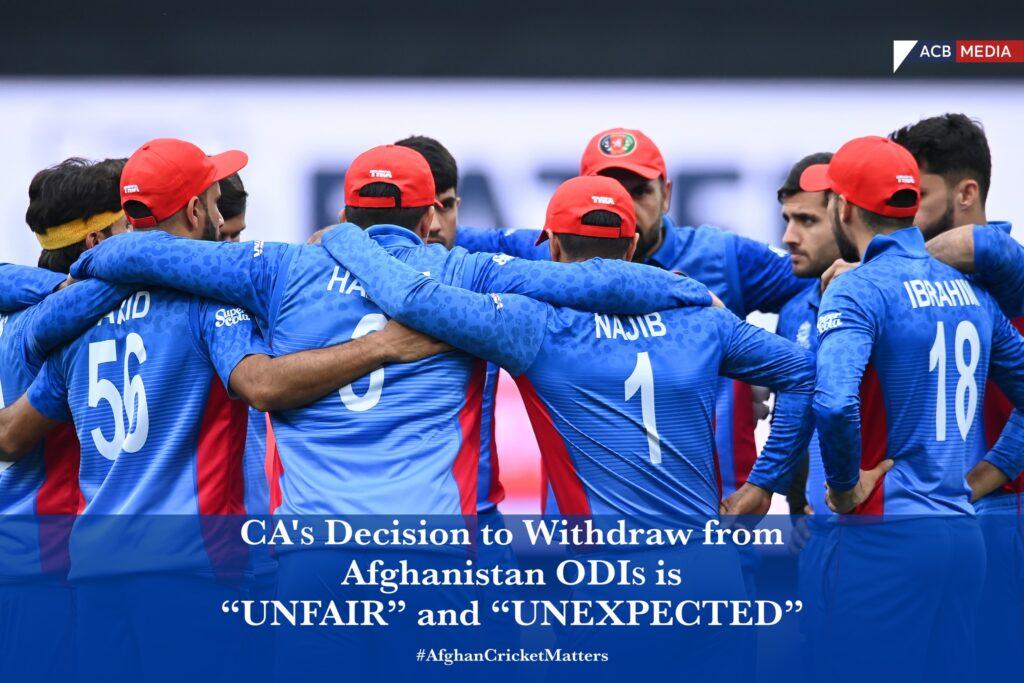 KABUL (Pajhwok): The Afghanistan Cricket Board (ACB) has condemned the Cricket Australia’s decision to pull out of a three-day ODI series against Afghanistan and called it unfair.

“Basic human rights is not politics,” Cricket Australia chief executive Nick Hockley said in a statement sent to AFP after Afghanistan’s cricket board lashed the cancellation as “pathetic”.

The two sides had been due to play three one-day internationals in the United Arab Emirates in March. “It is clearly a very challenging and sad situation. We did not take this decision lightly,” Hockley said.

Cricket Australia had been hopeful of playing Afghanistan and was in regular contact with the Afghanistan Cricket Board, he added.

“However announcements by the Taliban in late November and late December signalling the deterioration of basic human rights for women in Afghanistan led to our decision to withdraw from these games,” he said.

However, ACB said it considered the decision ‘unfair, premature and concerning’ and would share its position with the International Cricket Council soon.

In a statement, the ACB said in bilateral meetings with Australia they had reached a complete decision to hold the series and based on that decision the ACB was fully prepared to host the games and was ready for better management, security and other related issues.

Based on this, the ACB said the Cricket Australia’s decision was politically motivated, irrational, premature and a betrayal of the Afghan nation who loved cricket profoundly.

The ACB believed the Cricket Australia had taken the decision under pressure from their government, which only affected the Afghan cricket and cricket fans.

The board said according to ICC, other cricket boards and the Afghanistan Cricket Board, cricket should never fall prey to politics and should be kept away from politics.

The decision also hurt the sentiments of a great nation that enormously loved cricket as cricket is the only source of happiness for them. Afghanistan has presented great players to the world, the board said.

The ACB said Australian also postponed the only test match between the sides as a result of a political and unreasonable decision.

The board also said it would review all the relations and connections with Australia as well as the participation of Afghan players in the Australian Big Bash League.

A number of Afghan players, including Rashid Khan, had criticized Australia’s decision and vowed not to play in the Australian Big Bash League.