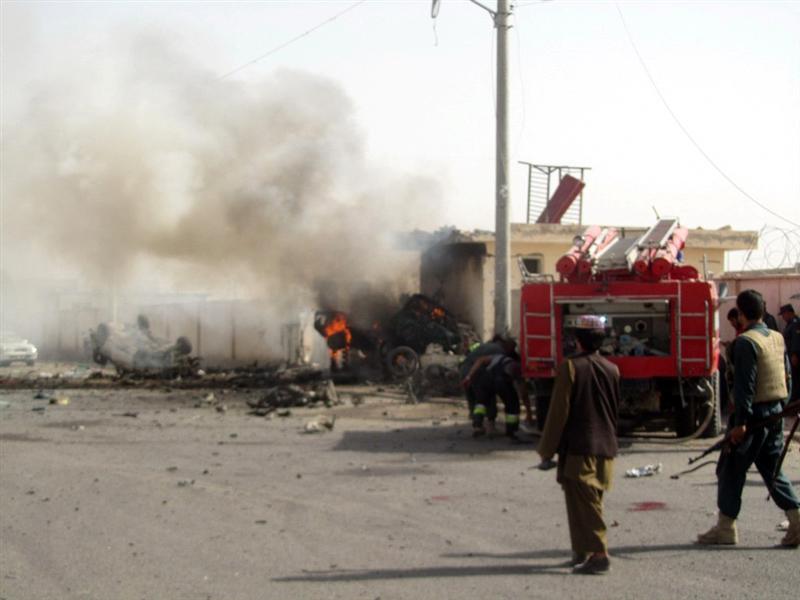 LASHKARGAH (PAN): Ten policemen and a child were killed in a suicide car bombing on Sunday in Lashkargah, the capital city of the southern province of Helmand, officials said.

The incident took place at around 8:30 am when a suicide bomber detonated his explosive-packed sport utility vehicle next to a checkpoint in front of police headquarters, the governor’s spokesman, Daud Ahamdi, told Pajhwok Afghan News.

A 10-year-old boy and 10 policemen were killed, and 10 others including two civilians wounded in the incident, he said.

Eleven dead bodies and 10 injured have been taken to Bost and emergency hospitals, a doctor on duty at Bost hospital said on condition of anonymity.

Two police vehicles and several civilian vehicles were destroyed in the blast.

Security personnel have cordoned off the area and taken the several dead and injured to the hospital.

Taliban spokesman Qari Yousuf Ahmadi claimed responsibility for the attack, saying that the attack was carried out by a suicide bomber named Mohammad Gul from the Nad Ali district of the province. Eighteen policemen were killed and a dozen others injured, he claimed.

Two weeks ago, security responsibility for Lashkargah was handed over from the International Security Assistance Force (ISAF) to Afghan security personnel.