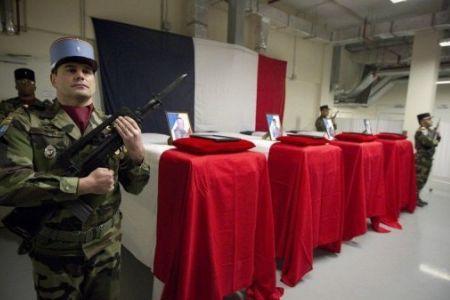 The bomber detonated his explosive vest at 11.30 am close to a convoy of French troops in Nejrab district, the town’s administrative chief, Sultan Mohammad Safi, told Pajhwok Afghan News.

FOur French soldiers were killed and as many others injured in the attack that also wounded three Afghan civilians, said Asadullah Hamidi, the provincial police spokesperson.

In a statement, the NATO, but did not reveal the exact location of the incident.

In Paris, the president’s office verified four French soldiers were killed and five others wounded in the Kapisa assault. “This morning during an operation in Kapisa, four of our soldiers were killed. Five wounded were evacuated including three in a serious condition.”

President Francois Hollande said in a statement: “It is with the greatest emotion that I share the grief of the families…Today all of France is affected.”

France provides the fifth largest contingent to ISAF’s 130,000-strong force in Afghanistan, with 3,500 soldiers stationed mostly in Kapisa.
“I wish to salute the courage and devotion of our troops in Afghanistan,” Hollande said, adding he had asked his Defence Minister Jean-Yves Le Drian to head to Afghanistan on Sunday.
As usual, Taliban claimed responsibility for the suicide bombing, with their spokesperson Zabihullah Mujahid saying that 12 French troops were killed.