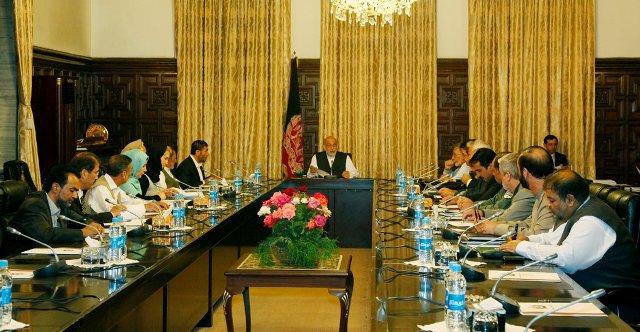 KABUL) decision to hold the presidential vote in line with the Afghan constitution.

Karzai was presented an IEC report regarding the presidential poll at a meeting attended by senior government officials and members of the panel, said a statement from his office.

IEC head Fazal Ahmad Manawi said: “The panel is duty-bound to launch preparations for transparent and fair presidential and provincial council election.” He said the voter registration process and preparation of voter lists were included in the first phase.”

He hoped registration process would pave the ground for transparency in the ballot. The commission plans to enable voters to exercise their franchise rights within their own constituencies, a move aimed to prevent fraud.

Manawi added the registration drive would create work opportunities for about 45,000 people across the country, with voter cards valid for four future elections.

The registration programme and voter lists are estimated to cost about $80 million, to be provided by the international community through the United Nations.

Welcoming the electoral preparations, Karzai said a free presidential vote would be a huge step toward strengthening democracy and the legal system in Afghanistan. The government would make all-out efforts to make the process a success, he promised.

Stressing the need for Afghanising the elections, he asked the commission not to allow foreign interference.  Cooperation was needed from the UN and observer bodies to ensure transparency, but outside interference in the process was unacceptable.

The meeting also discussed the mechanism and expenses of the electoral process. They recalled the pledges held out at the Chicago summit, Tokyo and Bonn conferences that foreign aid would be routed through the finance ministry to strengthen the Afghan government.