Anti-Sherzai protests halted for a week 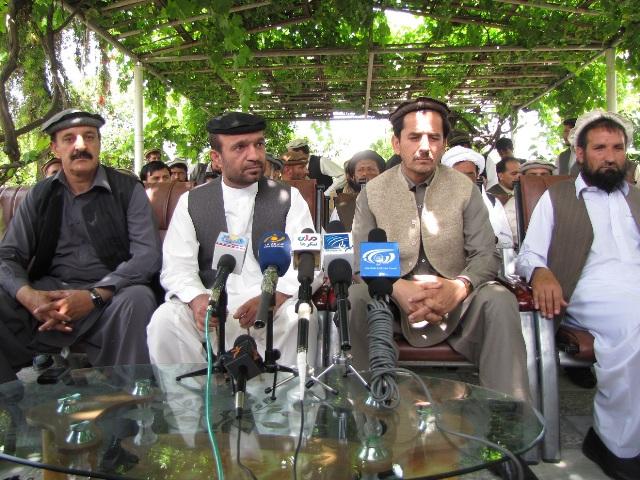 Anti-Sherzai protests halted for a week

JALALABAD (PAN): Leaders of protests against Nangarhar Governor Gul Agha Sherzai on Thursday announced a week-long halt to their campaign, saying a big gathering of tribal elders would take place next Thursday to decide their future line of action.

Addressing a crowded press conference in Jalalabad, lawmaker Haji Abdul Zahir Qadir, Pir Balkh Gardiwal and tribal elders said they had decided to stop the demonstrations until next Thursday, when tribal elders from across the eastern zone would gather to make a joint stand.

They said another reason behind the halt was to avoid any untoward incident during rallies as many feared anti-state elements could take advantage of the situation.

Faridoon Momand, a Wolesi Jirga member who supported Governor Sherzai, was also present at the news conference. Momand had arranged a meeting of tribal elders at the governor’s house two days ago to muster their support for Sherzai.

Led by Qadir and Bakhash, the protestors have accused Sherzai of grabbing government land and misappropriating development funds.

Qadir told reporters they had agreed to suspend demonstrations for a week. “Every problem will be discussed at Thursday’s gathering that would take a collective decision.”

Momand held a similar view, saying next Thursday had been fixed for a unified decision. He feared anti-state elements could take advantage of the situation arising from the protests.

“I believe those provoking the sentiments of the people would cut a deal and would be friends again, but ordinary folks will gain nothing from the showdown,” he concluded.