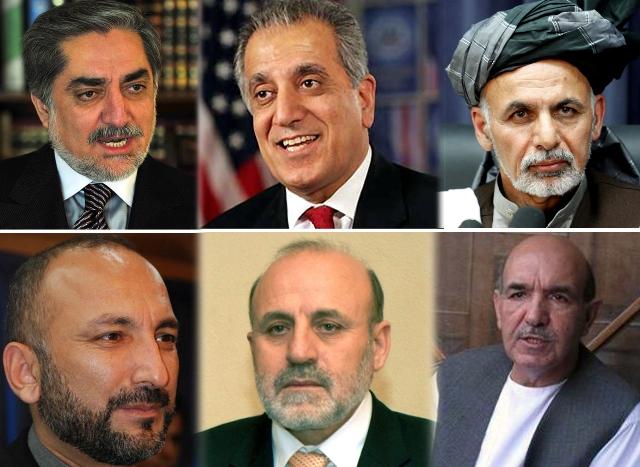 KABUL): With the 2014 presidential vote drawing closer, public discussions revolve around who the contenders will be. But so far no one has formally jumped into the electoral fray, whose result is expected to have a significant impact on the country’s future.

The official, speaking on condition of anonymity, revealed in recent months Karzai had been tending to throw his weight behind his former finance minister Ghani Ahmadzai, who had been afforded an effective campaign opportunity in the form of visits to all the 34 provinces of the country in connection with the security switch.

At the international level as well, the source said Ahmadzai, who had acknowledged the significant gains Karzai had made over the past 12 years, enjoyed ample support from important capitals in the West and elsewhere. “All this, including interactions with civil society leaders, gives him a head start over other presidential wannabes.”

Ex-interior minister Ali Ahmad Jalali is seen as yet another aspirant, but he is staying at a distance from Karzai’s camp, according to the official, who said the Coordination Council of Political Parties and Alliances was drumming up support for Minister of Commerce Anwarul Haq Ahady.

Syed Hamid Gilani has already dropped his bid, but he may swing behind another nominee. In case Khalilzad did not see any prospect of his victory, he could withdraw in favour Ahmadzai, the official indicated.

At the moment, the erstwhile US ambassador is hobnobbing with Uzbek warlord Abdul Rashid Dostum, Mohammad Mohaqiq and Balkh Governor Atta Mohammad Noor. But how far these negotiations succeed remains to be seen.

If not stoutly backed by President Karzai, Qayyum Karzai might also pull out of the race in favour of someone who guarantees the protection of his family interests, claimed another knowledgeable source. He said Prof. Abdul Rab Rasul Sayyaf was another hopeful, but he was expected to respect a presidential decision on a consensus candidate.

Despite opposition from within the alliance and financial woes, Dr, Abdullah remained determined to participate in the battle for the presidency and recently had a swing through different provinces, one his party colleagues said.

Former interior minister Atmar, backed by the main opposition grouping, has reportedly held a series of meetings with Khalilzad, Mohaqiq, Dostum, Ghulam Jilani Popal, Omar Zakhilwal and several influence-wielding former governors. But they have not yet discussed who will be their running mates.

Many in the Coordination Council concede chances of their nominee winning the presidential office are slim, agreeing the slot should go a Pakhtun — given the community’s political predominance and numerical strength.

Instead they are eyeing positions of first and second vice-presidents for their nominees. Ahmad Zia Massoud, Yunus Qanuni, Atta Noor and Mohaqiq are weighing their options to have a crack at the two VP seats.

By the same token, the Afghan Millat party is also in thick of discussions on the subject but has not been able to forge consensus on who should get its ticket. A member of the party, Kabir Rahmani, admitted there was mismatch of perceptions within the group that allowed everyone to speak their mind in deference to core democratic norms.

Having a lot of clout with Afghan Millat leaders, workers and supporters, Popal is inclined to support Ahmadzai.

Meanwhile, Pajhwok has learnt on good authority the National Alliance is sharply divided. If Abdullah is ignored, Qanuni, Noorul Haq Uloomi, Ahmad Wali Massoud and others will ditch the coalition. Pajhwok did try to take comments from Qanuni and Uloomi, but they were not available.

On the other hand, spokesmen for Wardak and Ahmadzai said they had not taken a formal decision so far on whether or not to contest the ballot. Ahmadzai, however, is spearheading a “National Consensus Programme” to woo the huge constituency of youth.

On the international front, key donors to Afghanistan — the United States and Britain — are seeking one vice-president position for Qanuni, Saleh or Abdullah. There are broad hints that Atta Noor, Ihsanullah Bayat, Qayyum Karzai, Rabbani and Modabir to be Khalilzad’s running mates.

They include a 16-page policy “Alliance for Peace and Stability”, prepared by Ahmadzai. Khalilzad has also devised a 10-page strategy “National Agreement on Stability and Change”. A third document drafted by Sayyaf contains four pages, but carries no title.

Similarly, a single-page plan has been drawn up by Qayyum Karzai. The tile of Karzai’s strategy is “Process of Strengthening the Nation.” Jalali, an Afghan American and a distinguished professor at the Near East South Asia Center for Strategic Studies, has come up with a programme called “A Vision, Short- and Long-Term Goals for Afghanistan”.

A 101-page policy has been prepared by Wali Massoud, former member of the Northern Alliance and younger brother of Ahmad Shah Massoud. His policy is available in the form of a booklet titled “National Agenda: Political Reforms and Durable Peace in Afghanistan”.

Safiullah said Khalilzad, who had launched efforts at creating national consensus, would concretise his plans on his return to Afghanistan. He is in a push to develop national consensus on a smaller number of candidates to pave the ground for a fair competition.

He said they had started distributing forms to people in all provinces as part of a campaign for Khalilzad and in this regard, a committee has also been established.

A Right and Justice party spokesman, Hamidullah Farooqi, said they wanted to effectively take part in the elections and had launched a national programme in this regard. They are trying to introduce a credible system that will be put into place with a majority vote. Consultations are underway among 23 leadership councils of political parties, but so far a consensus candidate could not be named.

He said once the councils reached a decision, then a ballot would be carried out in a democratic way under the Right and Justice party’s manifesto to field a consensus candidate, but nothing has so far been discussed in this regard.

The party’s deputy leader, Moeed Mrastial, said the cooperation council had drafted a three-article policy under which a technical team having up to 100 members from political groups would be created.

The second article is about launching a national programme and third is about reaching a decision on fielding a consensus candidate, he said.

A National Unity group member, Amarullah Aman, said discussions at the cooperation council of the council of political parties had reached their final stage and were likely to be finalised as of Thursday.

But a spokesman for the Abdul Hadi Arghandiwal-led Hezb-i-Islami Afghanistan rejected the party’s participation in consultative talks on support to Atmar. Abdullah Kamawal said their stance was that elections should go ahead with national consensus.

He said the HIA had entered an alliance with Karim Khalili to create national consensus. If that goal is not reached, HIA will announce its own candidate. The party has named no individual during talks at the Coordination Council.

Another HIA member, Qutbuddin Hilal, has recently opened a party office in Kabul. He aims to reunite all breakaway factions involving Farooqi, Sabawoon and Arghandiwal.

About the candidacy of the education minister, Kamawal said there had been some rumours about his quest for the presidency. To a question, he said Wardak was a minister who did not reserve the right under the party laws to be part of the leadership council.

Kamawal said Arghandiwal had obtained the economy ministry as part of a power-sharing plan. Arghandiwal was HIA leader before taking over as minister.

A source familiar with talks among political parties said President Karzai had tasked a three-member group involving Khalilzad, Ahmadzai and Sayyaf with forging national consensus on candidacies. Karzai would support one of them.

Interim set-up: Karzai is said to be trying to stay in office, but the constitution bars him from seeking a third term. Sources in the Presidential Palace say the latest plan being worked out at is about introducing an interim government that would last two years. Under the plan, elections may be delayed for two years.

Sources also say the US, the UK and Taliban have agreed on establishing an interim government and talks among the three sides are still ongoing.

On Saturday, Karzai told a joint press conference with British Prime Minister David Cameron that some countries, including Pakistan, had suggested power-sharing in Afghanistan.

Mehmood Karzai, another brother of the president, said Qayyum had not yet formally announced his candidacy, but he would contest for the sake of development and peace. Asked if Qayyum was being supported by the president, he replied the presidential stance remained unknown.

Head of Khalilzad’s office in Kabul, Sher Azam Azam, said the American diplomat of Afghan origin wanted an inclusive government that involved all political and ethnic groups. He said those involved in mass killings and corruption would not be part of the government.

The individuals include members of the Fikar Aw Amal Jirga, Loy Milli Harkat and other groups. They plan to hold meetings with possible candidates. The aim of these individuals is to cut elections costs and preserve the gains achieved over the past decade.

There have been gatherings of some small and big tribes in Kabul and other provinces. These gatherings were apparently aimed at attracting the attention of presidential candidates.

Two such gatherings were held at the Loya Jirga tent by the Ahmadzai and the Nasir tribes. Similarly, the Western Council had a gathering in Kabul. Other tribes including Sulaimankhel, Zadran and others have held similar gatherings.

Analysis: Political analyst Wahid Muzhda said only Qayyum had announced his candidacy and others were silent because the American game in Afghanistan was far from clear. He said among others, who had presented their policies and plans, only Sayyaf would be contesting the elections because he had President Karzai’s backing.

He said others who were propagating about their candidacies were not sure if the elections would be held because weapons were being distributed to the people in the north, where powerful figures were concerned about the elections.