Protestors clash with police in Kabul 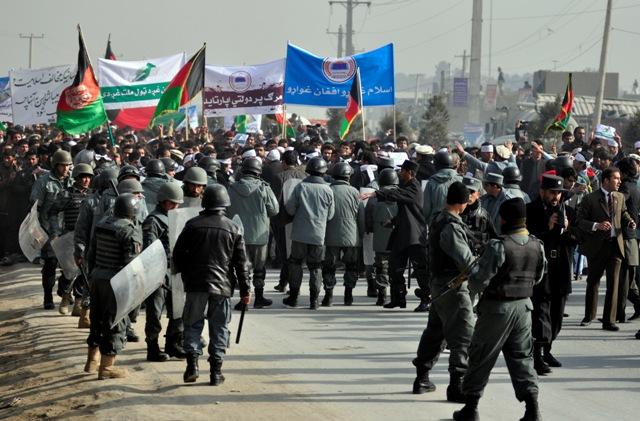 Protestors clash with police in Kabul

KABUL): Dozens of protestors, supporting a private TV channel and denouncing the detention of Gen. Abdul Wahid Taqat, on Saturday clashed with police in front of the Supreme Court in Kabul.

The protestors, marching from the Zhwandoon TV office, tried to enter the Supreme Court building, but police prevented them by using electric batons. In retaliation, the protestors pelted stones at law-enforcers.

When the situation returned to normal, the demonstrators issued a resolution, alleging a number of neighbouring countries were instigating certain elements to fuel tribal disputes in Afghanistan.

The protestors insisted Gen. Taqat had committed no crime and the Attorney General Office (AGO) should release him forthwith. The former general and political commentator was detained three days back.

Head of the civil rights department at AGO, Hafizullah Hafiz, told Pajhwok Afghan News that Gen. Taqat had been arrested on charges of fuelling disputes among tribes.

The AGO also issued orders for suspending Zhwandoon TV broadcasts after a round-table discussion on tribal disputes. Gen. Taqat and a number of other analysts took part in the discussion.

But Mohammad Anwar, a protestor, criticised the AGO action, saying the prosecutors should apologise to the TV channel.

The ministry recently sent a letter to AGO, blaming Zhwandoon TV for violating the media law. “We will not let anyone remove the words Islam and Afghan from electronic ID cards,” Yoon added.

Recently a demonstration was staged against the deletion of the two words from electronic ID cards, but the upper house denied removing the words.