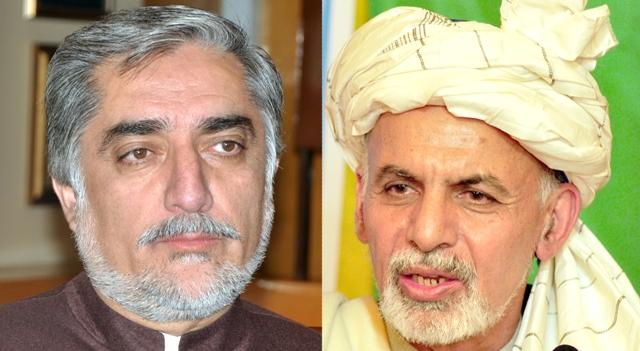 KABUL (Pajhwok): Next week’s second round of presidential election has split many influential political families, with some members supporting presidential runner Abdullah Abullah and others his rival Ashraf Ghani Ahmadzai.

Political experts call the difference of opinion within influential political families as natural keeping in mind Afghanistan’s history, but link it to personal gains.

With three days left to go for the presidential runoff election on June 14, the two frontrunners have been able to win support of a number of key politicians and with them the loyalty of voters they command during the 21-day old electioneering that will enter its last day tomorrow.

One of Karzai’s brothers, Mehmood Karzai, a businessman and developer, has joined forces with Abdullah while his older brother Qayyum Karzai, who dropped out of the presidential race days ahead of the April 5 election, has announced his support to Ghani.

Similar political decisions have been taken by the brothers of former jihadi leader Ahmad Shah Massoud.

One of his brothers Zia Massoud, a former vice-president, has swung behind Ghani in the runoff election and another brother Ahmad Wali Massoud announced his support to Abdullah a day earlier.

For being spiritual leaders, the families of Mujeddedi and Gilani wield enough influence among the masses in various parts of the country and the two families are also divided over the issue of backing a particular presidential hopeful.

Mujeddedi has announced his support to Ghani after what he said reciting Istikhara before making his decision. But his brother Najibullah Mujeddedi joined Abullah’s camp against his decision.

In eastern Nangarhar province, family members of slain former jihadi leader Haji Abdul Qadir have split over the issue of whom they should support in the election.

Former governor of Nangarhar and Kabul Haji Din Mohammad is a member of Ahmadzai’s campaign team, but his brother Haji Baryalai is a supporter of Abdullah.

Similar decisions have been taken by family members of another former jihadi leader Haji Zaman Khan Ghamsharik in Nangarhar.

Powerful ex-jihadi commander Bacha Khan Zadran in southeastern Paktia province and his brother Amanullah Zadran are not on the same page when it comes to political allegiance. The former supports Ghani and the latter Abdullah.

Lawmaker from eastern Kunar province Haji Sakhi Mashwanai is on the side of Abdullah while his cousin Wilayat Khan, a provincial council member, has chosen Ghani.

Political analyst and Kabul University teacher Ahmad Zia Rifat said many monarchs during Afghanistan’s 350 years of history had been dethroned by their family members. “Therefore, the difference of opinion in politics is not unnatural.”

In a particular reference to Karzai’s and Massoud’s families, he said the two families had strong political differences within.

Rifat said unfortunately it rarely happened in Afghanistan that such political rifts were based on national interest.

The expert said the quests to forge alliances ahead of the runoff election were based on personal benefits and were not in the interest of the country.

The university teacher refused to accept that the politicians taking sides had the intention to reach a common political goal.

“As far as I know Qayyum Karzai joined Ghani because of his tribal tendency and Mehmood Karzai joined Abdullah because his economic plans did not match those of Ghani.”

About Massoud’s family members, he said Ahmad Zia Massoud and Abdullah had long-running difference of opinion that finally led to Zia joining Ghani.

He said Abdullah and Ahmad Wali Massoud had long been of the same view on politics and thus both easily joined hands.

It is pertinent to mention here that some of the politicians joining forces with the two frontrunners have been accused of widespread corruption.